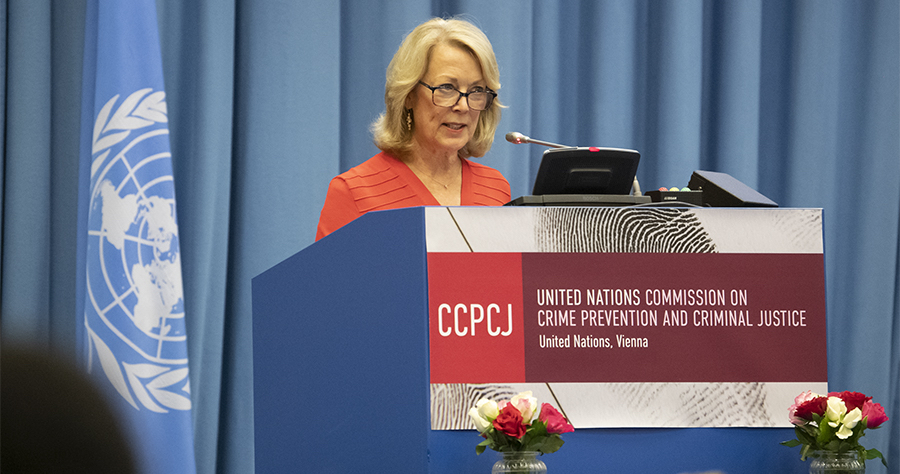 Madame Chair, allow me to thank the Extended Bureau, Director Fedotov, and UNODC for organizing this session.

On behalf of the United States, I offer my condolences to the family of Dmitri Vlassis – and all of UNODC – on the sad occasion of his passing last month. Dmitri was an exemplary public servant who transformed our global approach to combating transnational organized crime and corruption.

Dmitri’s legacy is cemented in two treaties that have been ratified by nearly every country – the UNTOC and the UNCAC – but it is clear our work in Vienna is just beginning. While many of us in government see the world as it exists and work within its constraints to make it better, Dmitri had the rare ability to imagine a better world with higher standards for law enforcement cooperation.

This is the spirit in which we approach this year’s theme on crimes motivated by intolerance and discrimination – also known as “hate crimes” or “bias-motivated crimes.” In every country, police, prosecutors, and judges have a responsibility to protect all citizens and to provide victims with justice.  This is particularly true in the case of hate crimes, which not only target a specific victim, but also send a message of fear and intimidation to the victim’s entire group and community.

We all know that when authorities fail to protect vulnerable groups from hate crimes, those communities can find themselves in dangerous cycles of retaliation and violence. In turn, the same groups – who desperately need protection and assistance, but no longer trust law enforcement – may not cooperate with authorities who need their help to solve and prevent other types of crimes.  This cycle of violence, intimidation, and impunity can have a dangerous and destabilizing effect.

This is why every state – whether or not it has adopted a specialized hate crime law – should identify, report, and respond to hate crimes so their perpetrators can be brought to justice.

At home, the United States strongly condemns hate crimes and vigorously investigates and prosecutes them. For example, the Department of Justice has:

We look forward to sharing good practices such as these at a side event with the OSCE and the Government of Bulgaria at 2:20pm on Tuesday, May 21 in Room M5. We hope you can join us.

These debates are why the CCPCJ plays a critical role in helping Member States protect their citizens, promote rule of law, and foster international cooperation to address a wide range of crimes.

For example, since 2011, the CCPCJ and its Intergovernmental Expert Group (IEG) in Vienna have also become the premier forums for UN debates on cybercrime. The United States was pleased to join over 100 countries at the Fifth IEG this March, which revealed a clear demand for the UN to provide a dedicated space for law enforcement experts to share experiences.  Any UN efforts to combat cybercrime should be based in Vienna – where criminal justice authorities guide policy – and should address the priorities of our experts who investigate and prosecute cybercrime on a daily basis.

This week, the United States also looks forward to working together with Member States to prepare for the 14th Crime Congress in Japan. We urge the CCPCJ to adopt a resolution this week to set a positive vision for the Kyoto Declaration, and we encourage all Member States to finalize negotiations on this document prior to April 2020.

Madam Chair, we have much work ahead of us to ensure that the United Nations contributes effectively to our shared goal of preventing and countering crime. We look forward to working under your leadership and pledge our support for a constructive week.