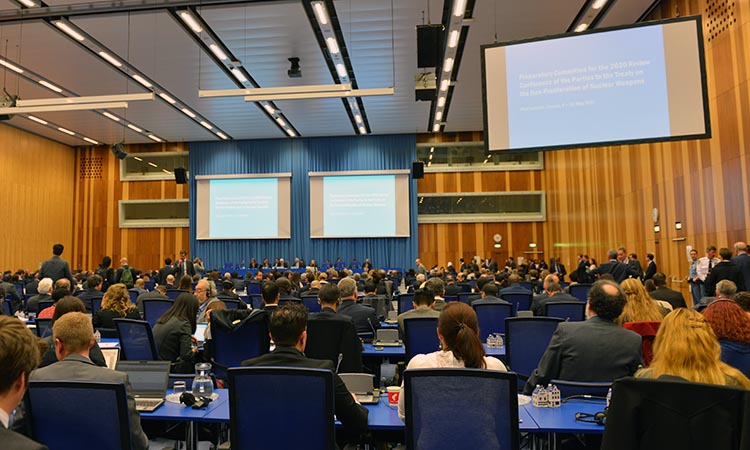 The 2017 Preparatory Committee for the 2020 Nuclear Non-Proliferation Treaty Review Conference was in session May 2 – May 12, 2017 in Vienna.

Statement by the United States in Cluster 2: Regional Issues

Statement by Ambassador Robert A. Wood

The United States reaffirms the critical role of the NPT in enhancing the security of all States Parties and promoting regional security and stability.  We welcome the opportunity to discuss several regional proliferation and compliance challenges that jeopardize our collective security.

Foremost among these is North Korea’s destabilizing and unlawful pursuit of nuclear weapons and advanced delivery systems, which pose an increasingly dangerous threat to international peace and security and an explicit threat to the national security of the United States and our allies.  The North Korea we confront today operates far beyond the boundaries of international law and nonproliferation norms: In 2016, the DPRK resumed its spent fuel reprocessing activities, admitted to enriching uranium for nuclear weapons, and carried out two nuclear tests and over 30 ballistic missile launches – all in open defiance of multiple UN Security Council resolutions and with the stated objective of being able to attack U.S. and allied cities with nuclear weapons.  We cannot allow these developments to pass without increasing the consequences for the Kim Jong-Un regime and its enablers.  We must impose and fully implement more punitive and consequential measures to compel the DPRK to change course.  The DPRK must be held to account.

We are exploring the full range of diplomatic, security and economic options to address the North Korean threat and our actions must be commensurate with the growing magnitude of North Korea’s violations of its obligations.  It is the obligation of every country here today to implement both the spirit and the letter of the multiple resolutions unanimously adopted by the UN Security Council.  We must all do our share, and we call on all countries, to compel the DPRK to make the strategic decision to abandon its unlawful weapons programs and cease the provocations that so imperil international peace and security in the region.  As Secretary Tillerson noted two weeks ago at the UN, China’s role is particularly important.  We hope China will alter its strategic thinking and partner with us in this endeavor to demonstrate to the DPRK that it stands alone in its pursuit of weapons of mass destruction.  This is essential if we are to convince North Korea to change course and engage seriously on denuclearization efforts that lead to the abandonment of all its nuclear weapons and existing nuclear programs, a return to the NPT and IAEA safeguards, and full compliance with its nonproliferation obligations.

The United States will not accept North Korea as a nuclear-armed state.  North Korea must comply with its international obligations and commitments or face the consequences.  The only path to a secure, economically-prosperous future for North Korea is for it to abandon its WMD programs.

The United States is currently undertaking a review of our policies regarding Iran, including its destabilizing activities in the Middle East and the Joint Comprehensive Plan of Action.  While that review is underway, we remain committed to ensuring strict and rigorous implementation of Iran’s nuclear commitments under the JCPOA, and will continue to fulfill our own commitments.  Given Iran’s troubling history of noncompliance – with the NPT, with IAEA nuclear safeguards, and with multiple, legally-binding U.N. Security Council resolutions – and its past undeclared nuclear activities and nuclear weapons program, thorough IAEA verification remains absolutely essential to providing the international community with confidence that Iran’s nuclear program is and remains exclusively peaceful,  and that no undeclared nuclear activities or activities potentially related to weaponization are occurring anywhere in Iran.

To enable the IAEA to provide such assurance, Iran must strictly adhere to all commitments and technical measures under the deal and the international community must be prepared to respond to any violations of Iran’s commitments.  Any new and credible concerns of undeclared nuclear activities can and must be pursued by the IAEA, which must use all of its authorities to monitor Iran’s compliance with all portions of the Joint Comprehensive Plan of Action.  The United States will also continue to hold Iran accountable for its other destabilizing activities in the region, including missile development and support for terrorism.

Nearly six years have passed since the IAEA Board of Governors found Syria to be in noncompliance with its safeguards agreement for constructing an undeclared plutonium production reactor at Dair Alzour with the assistance of North Korea.  Since then, the Asad regime has refused to cooperate with the IAEA to remedy its noncompliance, instead prosecuting a brutal campaign of violence against the Syrian people.  The Syrian regime’s callous disregard for international legal obligations related to weapons of mass destruction became additionally, and tragically, clear in April 2017, with its use of prohibited nerve gas upon civilians in the town of Khan Shaykoun – presenting the international community with new challenges in deterring the use of weapons of mass destruction and ensuring compliance with nonproliferation obligations.  Syria’s unresolved nuclear noncompliance is no trivial matter either, despite claims to the contrary by the regime and its patrons and apologists, and should be a matter of urgent concern to all NPT States Party.  We call on Syria to cooperate fully and urgently with the IAEA and to provide it with access to all locations, materials, and persons necessary to verify the peaceful nature of its nuclear program.

The United States supports the long-term goal of a Middle East free of weapons of mass destruction and delivery systems, alongside a comprehensive and durable regional peace.  However, we are cognizant of the political and security realities that continue to impede progress on such a zone, including the lack of trust among the regional states, ongoing conflict and noncompliance in the region, the horrific use of chemical weapons by Syria and non-state actors, and the non-recognition of Israel by many states in the region.

We believe progress is possible, but only through inclusive dialogue aimed at building confidence and addressing the legitimate concerns of all regional states.  Misguided attempts to coerce an outcome, or to hold the NPT review process hostage, indicate a misunderstanding of the function and purpose of weapons-free zones.  Such efforts will fail, as they have in the past, and betray political objectives unrelated to the pursuit of a safer and more secure Middle East.

A weapons of mass destruction-free zone must emanate exclusively from the regional states and be based on arrangements freely arrived at, as has been the case in every other such zone.  Unfortunately, the region is still far from achieving the essential conditions for such a zone: a comprehensive and durable peace and full compliance with all arms control, nonproliferation, and disarmament obligations – and too far even from establishing the prerequisites for meaningful dialogue, such as mutual recognition, direct relationships, confidence, and trust.  Anyone who wishes to see a WMD-free zone come into existence should work to reduce regional tensions and build trust, beginning with establishing direct dialogue among all the affected parties.

We encourage the regional states to assume responsibility for advancing this goal and to pursue constructive avenues for doing so.  For our part, the United States is prepared to support direct, regional dialogue based on the principles of consensus and mutual respect.  We stand ready and willing to work with the UK and Russia to support such a regional process, as the opportunity arises.

We also remain concerned by the growing number of nuclear weapons and their delivery systems throughout South Asia, and continue to encourage all states with nuclear weapons to exercise restraint regarding nuclear and missile capabilities. We do not believe that these weapons enhance regional or global security.  Moreover, we believe that a more stable and economically integrated region would help enormously in laying a sustainable foundation for regional and global peace and security, as well as for future progress on nuclear disarmament, nonproliferation, and confidence building measures.  At the same time, we welcome the steps that states have taken to bolster global nonproliferation efforts, including by harmonizing with, adhering to, and joining export control regimes and supporting efforts to prevent the acquisition and use of weapons of mass destruction by non-state actors.

The United States continues to support the long-term goal of NPT universality, and we remain committed to efforts to strengthen and uphold the Treaty.