U.S. on the Safety, Security, and Safeguards Implications of the Situation in Ukraine
By U.S. Mission UNVIE
8 MINUTE READ 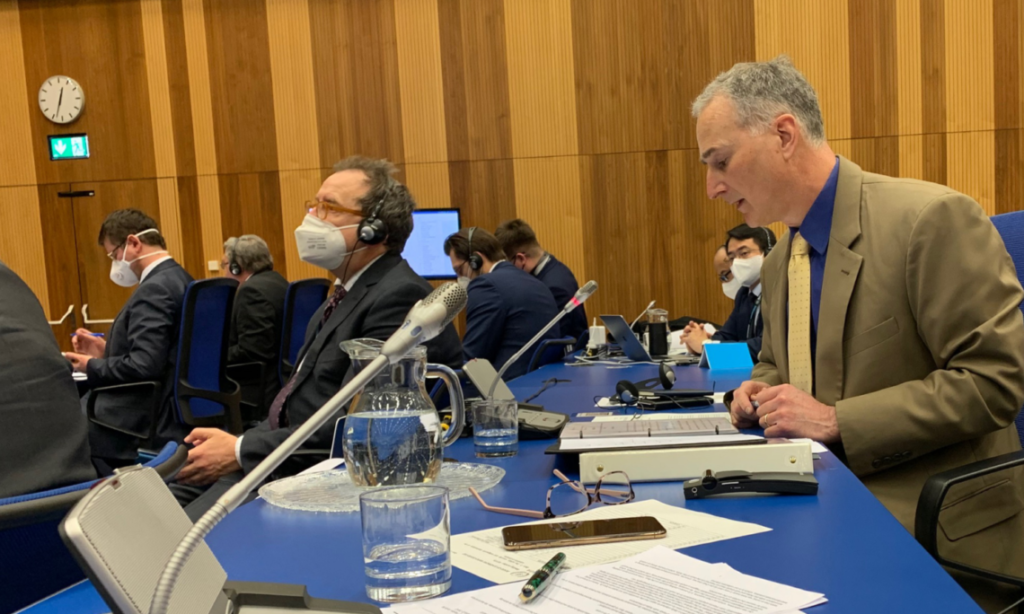 IAEA Board of Governors Meeting, Agenda Item 1: The safety, security, and safeguards implications of the situation in Ukraine

Allow me to thank you for convening this special meeting to address the crisis in Ukraine, to convey my appreciation to my Canadian and Polish colleagues for requesting this meeting, and to the DG for his profound words.  I also commend the Ukrainian officials for promptly bringing these dangers to our attention, despite the grave risks they face.

I note with additional irony the comments by the distinguished Governor of Russian Federation that they seek to avert the crisis to nuclear sites in Ukraine that have brought about with unilateral and unprovoked action.  Further regarding its comment that nuclear sites were not seized by force, when an armed tank and soldiers arrive at your doorstep, it’s pretty self-evident.

Nevertheless, I agree with the distinguished Governor of the Russian Federation that we should not politicize these proceedings.  Indeed, we are here today to address the safety, security, and safeguards implications brought about by the Russian Federation’s violation of Ukraine’s sovereignty, independence, and territorial integrity of Ukraine.  We condemn these unprovoked attacks against Ukraine as violations of international law, as cited by the distinguished Governor of Poland.   Let me stress though that Moscow has once again disregarded the assurances it provided to Ukraine in the Budapest Memorandum.

These are extraordinary circumstances, and Russia’s actions directly threaten the IAEA’s core missions of nuclear safety, security, and safeguards.  We share Director General Grossi’s concerns, and we have no choice but to confront those actions, because they are directly relevant to our responsibilities here.

I thank the Director General for providing regular updates on the situation in Ukraine, and I encourage him to continue monitoring developments and to keep the Board and Member States informed.  I echo his call on all parties to refrain from any measures or actions that could jeopardize the security of nuclear material and the safe operation of all nuclear facilities.  I also applaud the State Nuclear Regulatory Inspectorate of Ukraine for its continuous updates to the IAEA and the international community, and for the bravery and dedication of its staff in carrying out its essential duties in the face of extraordinarily trying and dangerous circumstances.

We view with grave concern the takeover of the Chornobyl site by Russian military forces.  The international community came together in the aftermath of the Chornobyl disaster to provide substantial assistance to Ukraine and has continued to do so for decades.  Russia’s military activities in the Chornobyl Exclusion Zone leading to and following this takeover have already led to increased local radiation levels and risks setting back decades of effort and investment – including billions of dollars in construction and other assistance – to contain the extraordinary hazards at this site.  The Ukrainian staff at the site have not been allowed to leave and have been forced to work multiple shifts.  This added stress on staff performing critical tasks further jeopardizes the safety and security of the site and the public.

The United States calls on Russia to immediately cease its invasion and aggression against Ukraine, to remove all Russian military forces from Ukraine’s internationally recognized territory, and to restore control to legitimate Ukrainian authorities.  We view with grave concern Russian armed forces in the vicinity of Ukraine’s Nuclear Power Plants, and in particular claims that its armed forces control the territory around the as Zaporizhzhya Facility, and note destruction reported at the perimeter of the RADON Radioactive Waste Disposal Facility.  These incidents highlight the real and immediate risks that facilities with radioactive or nuclear material will suffer significant damage during the Russian invasion, with potentially severe consequences to human health and the environment.  We call for Russia to halt any further use of force that might put at risk Ukrainian nuclear facilities, interfere with Ukraine’s ability to maintain the safety and security of those installations and surrounding populations, or interfere with the IAEA’s ability to fulfil its safeguards mandate.  The Agency and its Member States should be prepared to offer and provide any assistance that Ukraine may need to restore and sustain the safe and secure operation of those facilities and sites.  Mr. Director General, for our part, the United States stands ready to provide such technical assistance in order to mitigate the consequences of Russia’s invasion.

Allow me to turn now to the nonproliferation implications of Russia’s continued invasion of Ukraine.  Ukraine’s own nonproliferation record has been nothing short of exemplary, beginning with its decision to accede to the Non-Proliferation Treaty and, as a non-nuclear-weapon State, let me emphasize, to remove all nuclear weapons from its territory and return them to Russia control.  In recognition and support of that decision, in 1994 the United States joined the United Kingdom and the Russia Federation in providing security assurances to Ukraine that we—the United States, United Kingdom, and the Russian Federation– would respect its independence, sovereignty the territorial integrity.  Yet here we are.  Russia has once again betrayed the assurances it provided in the Budapest Memorandum.

I applaud Ukraine’s cooperation with the IAEA in the implementation of its comprehensive safeguards agreement and Additional Protocol.  Because of this cooperation, the IAEA was able to conclude that all nuclear material in Ukraine remained in peaceful use.  It is now deeply regrettable that actions by Russia and Russia’s proxies prevented the IAEA from carrying out the safeguards activities necessary to maintain that conclusion for 2020, though the Secretariat continues to make clear that it has found no indications of any proliferation concern.  I ask the Secretariat to take whatever steps are necessary and achievable to fully account for nuclear material in Ukraine so that it will be in a position once again to verify, through its own independent safeguards activities, that Ukraine’s declarations are both correct and complete.

For decades, despite deep political differences, the United States and the Soviet Union – and now the Russian Federation – worked together to champion the Non-Proliferation Treaty and the IAEA safeguards system as the bedrock of the global nuclear nonproliferation regime.  It is therefore a cause for deep concern that Russia’s current leaders, in their wanton and unprovoked aggression against the peaceful Ukrainian nation, have acted without heed to the potentially grievous harm to the nonproliferation regime.

The Board has before it a draft resolution on the safety, security, and safeguards implications of the situation in Ukraine which the United States is pleased to support.  This is not an effort to bring political issues before this Board.  Rather, it is a necessary response to the issues that have been forced upon the Board through acts of violence and wanton aggression.  These acts deserve this body’s condemnation precisely because they put at risk our core responsibilities as stewards of this Agency and its mandate to ensure the safe, secure, and peaceful use of nuclear energy worldwide.

In closing, Mr. Chair, I would ask the Director General to keep this Board informed of any further developments in Ukraine.  We must all remain ready to take up this issue once again as these developments may warrant.