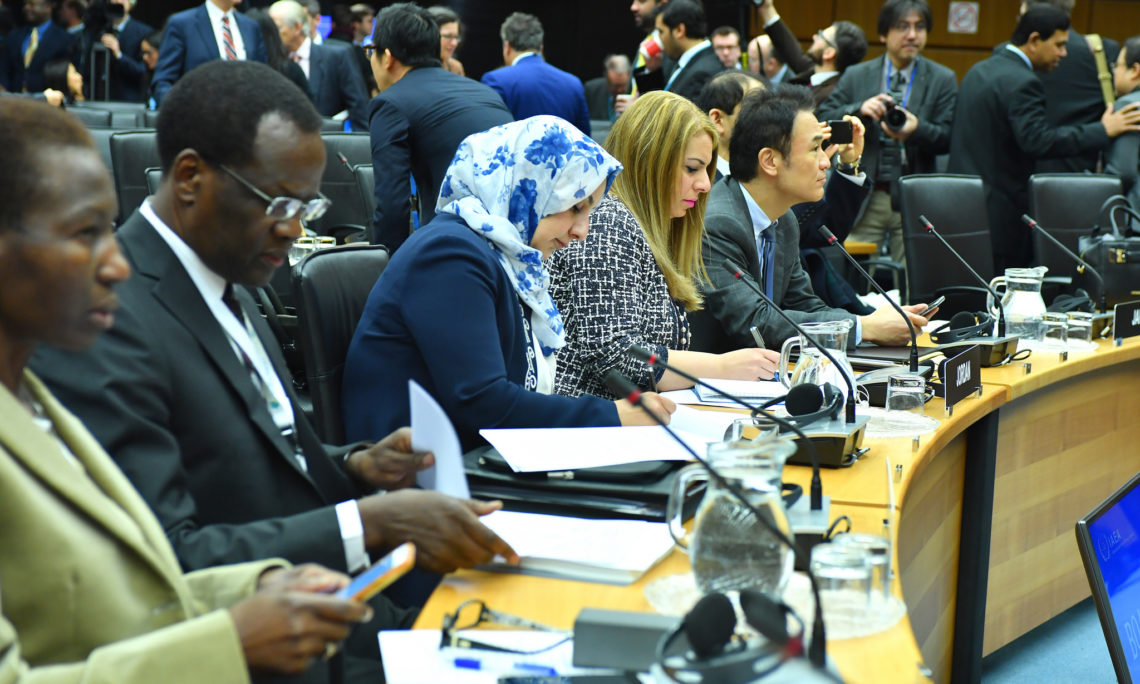 Agenda Item 7: Any Other Business

For the sake of efficiency, please let me address a number of issues under AOB in one consolidated statement. I apologize in advance for its length.

Given this, the United States remains committed to working with Member States and the IAEA to strengthen individual state’s nuclear security regimes and ensure that nuclear and other radioactive materials and facilities remain secure. We remain a committed partner to the IAEA in these efforts, and we appreciate the support of other Member States. We would like to thank Jordan for its successful convening of the Nuclear Security Contact Group last month in Amman. We find the Contact Group a valuable forum for discussing issues of mutual concern and we encourage other Member States to join the Group by subscribing to the Statement of Principles in INFCIRC/899.

We received valuable summaries of the Agency’s 2017 achievements, along with the ambitious schedule of activities it has planned in 2018. In the end, as we all know, it is the impact of this work and these important resources that really matters. We therefore encourage the Secretariat to promote meaningful success stories on the impacts of its work. We know, and the Nuclear Technology Review demonstrated, that the IAEA does many great things all around the world, whether to improve human health, bolster energy security, solve environmental problems, or improve nuclear safety and security. We would like to see the Secretariat better publicize how these efforts interrelate, because we believe they are all linked, and that, as we have said before, nuclear security — just like nuclear safety — supports the many wonderful peaceful uses undertaken across the Agency.

We hope to hear more about such efforts in the spirit of continuous improvement and a constant search for efficiency that we hope the Agency is undertaking with its policy of a “One House” approach.

On a related note, the United States supports and advocates for the IAEA to consider non-isotopic alternatives to high-activity radioactive sources where appropriate, and we are heartened by progress in greater coordination among the Department of Nuclear Science and Applications, the Department of Nuclear Energy, and the Department of Safety and Security to address sources from cradle to grave, and to support alternatives such as stereotactic radiosurgery using linear accelerators. Such alternative technologies still meet the intent of peaceful uses but also permanently eliminate proliferation and security risks. We would therefore like to draw your attention to the upcoming Meeting of the Ad Hoc Working Group on Alternatives to High Activity Radioactive Sources, which is jointly chaired by Germany, France, and the United States.

The ad hoc meeting will take place on Thursday, June 14, the day after the annual meeting of the Code of Conduct on the Safety and Security of Radioactive Sources, and any Member State is welcome to attend. We encourage interested States to reach out to France, Germany, or the U.S.- to our missions here in Vienna- to obtain additional information on the meeting. We hope to see you there.

The United States regrets that the issue of so-called “Israeli nuclear capabilities” has once again been raised in the Board, as Israel has not violated any agreements with the IAEA, and is a longstanding and substantial contributor to the Agency’s technical work. No other state in similar circumstances is singled out for such unfounded criticism. Divisive and politically-motivated statements aimed at singling out one state in the region for censure do nothing to advance our shared, long-term goal of a Middle East free of weapons of mass destruction and delivery systems. On the contrary, such statements only serve to undermine the trust and confidence necessary to achieve progress toward these very goals. We encourage all regional states to pursue constructive avenues for advancing these shared goals, rather than repeating the same, politicized debates.

The United States continues to strongly support the long-term goal of a Middle East free of all weapons of mass destruction and delivery systems, alongside a comprehensive and durable regional peace. We are cognizant of the political and security realities that continue to impede progress in this regard, including the lack of trust among regional states, ongoing conflict and noncompliance in the region, the horrific use of chemical weapons by Syria and non-state actors, and the non-recognition of Israel by many states in the region.

We remain convinced that progress toward a WMD-free Middle East can only be achieved through direct, regional dialogue aimed at building confidence and addressing the legitimate concerns of all regional states. We urge the regional parties to proactively pursue such dialogue without further delay or precondition, and to take responsibility for advancing this important objective in a constructive, cooperative manner. For our part, the United States remains prepared to support direct regional dialogue based on the principles of consensus and mutual respect.

A previous speaker made reference to the 2015 Review Conference for the NPT. We join many in regretting that, after considerable effort, the 2015 NPT Review Conference was not able to reach consensus. As we have stressed in past Board meetings, we remain convinced that the proposals put forward in 2015 by some Member States were inconsistent with the international norms regarding the establishment of a nuclear or WMD-free zone and would not have advanced inclusive, consensus-based dialogue among the regional states.

Regarding the U.S. approach to the current NPT Review Cycle, we encourage all NPT Parties to take a broad view of how this Treaty has helped us to advance our shared security and development interests and aspirations, and how we can work together to preserve and expand those benefits.

In this review cycle the United States plans to focus on rebuilding our ability to reach consensus, based on the common interests of all NPT parties. Working together has yielded far more successes than disappointments over the last 50 years.

We also encourage NPT Parties not to dwell on divisive issues that cannot be resolved in the NPT review process.

The NPT reflects and reinforces the interests of all of its Parties. That is its enduring strength. The United States looks forward to working together with other NPT Parties to build on that valuable foundation.

Regarding the Due Account Mechanism, the United States, as a part of our longstanding support to the Agency’s Technical Cooperation Program, and consistent with our endorsement of the recommendations of the Working Group on Financing the Agency’s Activities, supports the adoption of measures to improve the effectiveness of the Due Account Mechanism. We welcome the Chair’s decision to appoint two facilitators to lead consultations on the Due Account Mechanism, building on the discussions held during the informal Technical Assistance and Cooperation Committee meetings in August 2017 and January 2018.  We look forward to working with the Ambassadors of Morocco and Slovenia, as well as our colleagues from the other Member States, in this endeavor.

This quarterly meeting of the Board coincides with International Women’s Week, which is being observed with a variety of activities here in Vienna and around the world. The United States appreciates the Agency’s expressed commitment to increase gender parity, particularly at senior leadership levels, and we encourage conscientious efforts in this area. We align ourselves with the statements delivered by Mexico on behalf of the Group of Friends for Women in Nuclear, and by Japan on behalf of JUSCKANNZ.

We recall the launch of the Vienna Chapter of the International Gender Champions Initiative in June of 2017, with the participation of Director General Amano, Deputy Director General Hayward, and the heads of every Vienna-based international organization, and many permanent representatives. We strongly encourage all heads of organizations to make the commitment to join them.

We also welcome the IAEA’s session this afternoon called “Check Your Blind Spot,” on unconscious bias at 1:15PM just outside of this board room, and we really encourage everyone here to attend.

Despite efforts in the area of gender parity and some incremental improvements, women remain significantly under-represented in all categories, and vastly so in the senior levels, particularly in technical fields. We commend the Director General for his announced goal of achieving gender parity in the Agency’s most senior positions by 2021. The United States also urges the Director General and the Secretariat to redouble their efforts to address the persistent challenge of underrepresentation of women across the Secretariat, and we remain ready to work with the Secretariat and other Member States to support and reinforce these measures. We look forward to receiving an update on how this effort is proceeding in 2018.