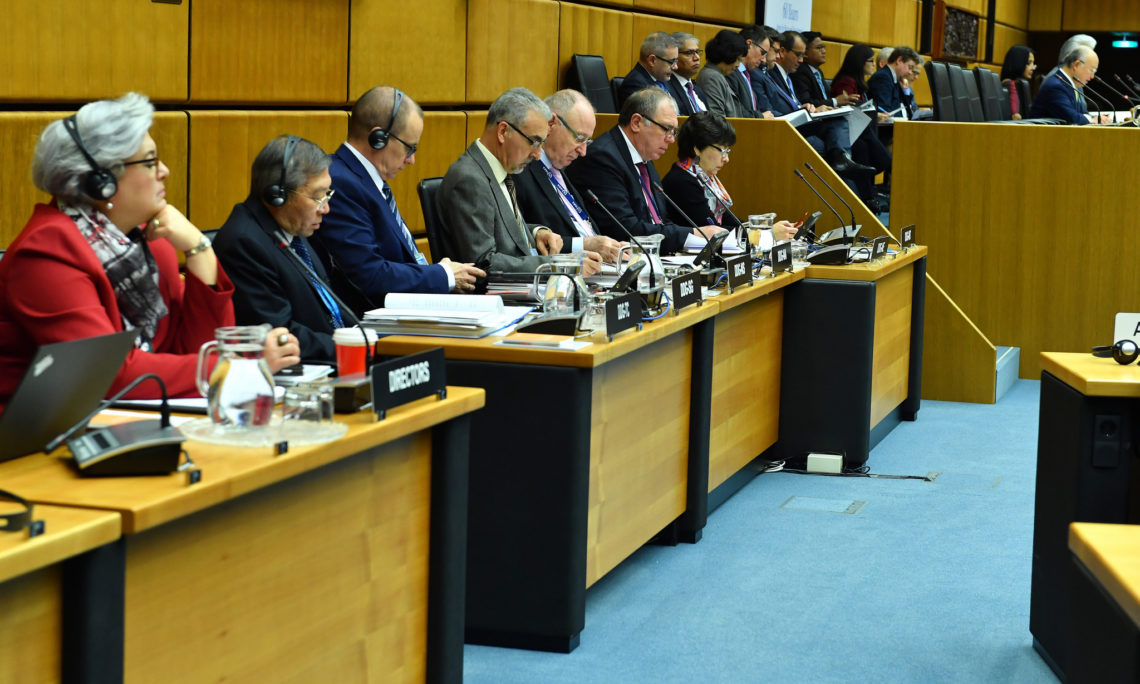 Agenda Item 6: Any Other Business

For the sake of efficiency, please let me address a number of issues under AOB in one consolidated statement. I apologize in advance for its length.

First, the United States commends the IAEA, the OECD Nuclear Energy Agency and the host government of the United Arab Emirates on a highly successful International Ministerial Conference on Nuclear Power in the 21st Century.

The United States concurs with the concluding statement by the President on the conference that nuclear power is an important energy option for many countries to meet their energy and economic needs; in the United States, nuclear energy is an essential source of safe, clean, reliable, and affordable power.

We reiterate our support for the valuable work of the IAEA in helping to ensure that the use of nuclear power is done with the highest levels of safety and security and with effective safeguards. We hope to see continued efforts in the international community to strengthen these elements, which, combined with continued development of innovative nuclear technologies, will be essential if nuclear power is to be a leading source of energy in the 21st century.

We look forward to the next conference in four years.

The United States remains committed to working with the IAEA and its Member States to strengthen individual State nuclear security regimes and ensure that nuclear materials and facilities remain secure. In fulfilment of its role in strengthening the international nuclear security architecture, last week the IAEA hosted a conference focusing on nuclear security through the lens of the Convention on the Physical Protection of Nuclear Material and Nuclear Facilities, also known as the Amended CPPNM or Amended Convention. Broad adherence to and implementation of international agreements like the Amended Convention support a strong global nuclear security framework, which is necessary to build and maintain public confidence in the peaceful use of nuclear technology.

The United States hopes that Member States participated actively in the conference and benefited from the many experts and practitioners that came together from all over the world to discuss their challenges and successes in implementing robust nuclear security regimes. The conference provided a unique and useful opportunity to recognize the value of the legal frameworks that form the foundation of our nuclear security regimes and helped us focus our efforts on further improving them. Thank you to the IAEA and those in the Division of Nuclear Security who worked to make it a success.

There is of course still more progress to be made. It has been a year and a half since the entry into force of the Amended Convention. We continue to seek its universal adoption – and just as importantly — full implementation. We thus encourage all States Parties to deposit their legal and regulatory basis for implementing the Convention with the IAEA as required under Article 14.1. We also continue to support the IAEA’s ongoing outreach and assistance efforts, including the points of contact meeting that was held earlier this month. We strongly urge all Member States to participate in these activities, as sharing experiences and best practices helps all of us better adhere to and implement the Convention.

The United States also wishes to underscore the important complementary role that the International Convention for the Suppression of Acts of Nuclear Terrorism (“Convention”) plays in strengthening the global nuclear security legal framework. We commend Canada for leading and organizing an event on the Convention in Vienna on December 5th, in cooperation with the UN Office on Drugs and Crime, to review implementation of the treaty on the 10th anniversary of its entry into force. We encourage all countries that have signed or ratified the Convention to participate in discussions focusing on tools, training, and assistance available to strengthen national implementation of the Convention, which will help ensure a comprehensive approach to legal frameworks that improve national efforts to prevent, deter and prosecute terrorists who seek to use nuclear or radioactive materials.

More broadly, we also see UNSCR 1540 as a foundational instrument in our efforts to combat proliferation of chemical, biological, and nuclear weapons, and their means of delivery, and we appreciate the strong support that the IAEA continues to show for UNSCR 1540 and the work of the 1540 Committee. The second comprehensive review of the status of the implementation of the Resolution and follow-on UNSCR 2325 reinforced the importance, relevance, and urgency of UNSCR 1540. The new resolution includes measures that will improve reporting and assistance, and increase attention to enforcement. We ask every Member State to support the work of the Committee and fully implement the Resolutions.

We also want to note the Board’s accomplishment in approving the Supplementary Guidance on the Management of Disused Sources at our September meeting. This is another important international instrument that strengthens the security and safety of radioactive sources and I encourage all Member States to make a political commitment to implement the Guidelines by sending a Note Verbale to the IAEA Secretariat. We would like to reiterate our invitation to all Member States to subscribe to the goals and commitments as described in the nuclear security-focused Joint Statements. The Joint Statements are an important voluntary political means for Member States to demonstrate the importance they continue to place on nuclear security issues. We thank our colleagues for highlighting their recent commitments and hope you all will join us in supporting these important issues.

Regarding the detection of Ruthenium-106 in Europe, ‎the United States shares the views expressed by the German delegation on this issue.

Many of you are already familiar with the International Gender Champions Vienna initiative.  I was pleased to join this effort and I look forward to the first annual meeting of the Champions later today.  I strongly encourage those of you who are not already Gender Champions to join us.  Increased gender equity has been shown time and again to increase the efficiency of organizations in both the private and public sectors.  For those IAEA Governors who maintain permanent residence in Geneva and wear multiple hats in the region, I encourage you to join the Geneva Chapter of the International Gender Champions.  Together, we, as committed leaders, can generate momentum at the highest levels for the greatest potential impact.

We would also like to endorse the remarks delivered by the Ambassador of Australia on behalf of the Group of Friends of Women in Nuclear. This Group also supports efforts to achieve gender parity as well as gender equity in the workplace.   While the Gender Champions are the heads of organizations, the Group of Friends consists of delegations. We encourage all delegations to consider joining this new group.

The United States regrets that the issue of so-called “Israeli nuclear capabilities” has once again been raised in the Board, as Israel has not violated any agreements with the IAEA, and is a longstanding and substantial contributor to the Agency’s technical work. No other state in similar circumstances is singled out for such unfounded criticism. Divisive and politically motivated statements aimed at singling out one regional state for censure do nothing to advance our shared, long-term goals of NPT universality or of a Middle East free of weapons of mass destruction and delivery systems. On the contrary, such statements only serve to undermine the trust and confidence necessary to achieve progress toward these goals. We encourage all regional states to pursue constructive avenues for advancing these shared goals, rather than repeating the same, politicized debates.

The United States continues to strongly support the long-term goal of a Middle East free of all weapons of mass destruction and delivery systems, alongside a comprehensive and durable regional peace. We are cognizant of the political and security realities that continue to impede progress in this regard, including the lack of trust among the regional states, ongoing conflict and noncompliance in the region, the horrific use of chemical weapons by Syria and non-state actors, and the non-recognition of Israel by many states in the region.

We remain convinced that progress toward a WMD-free Middle East can only be achieved through direct, regional dialogue aimed at building confidence and addressing the legitimate concerns of all regional states. We urge the regional parties to proactively pursue such dialogue without further delay or precondition, and to take responsibility for advancing this important objective in a constructive, cooperative manner. For our part, the United States remains prepared to support direct regional dialogue based on the principles of consensus and mutual respect.