Home Home | News & Events | U.S. Statement to the IAEA: Any Other Business 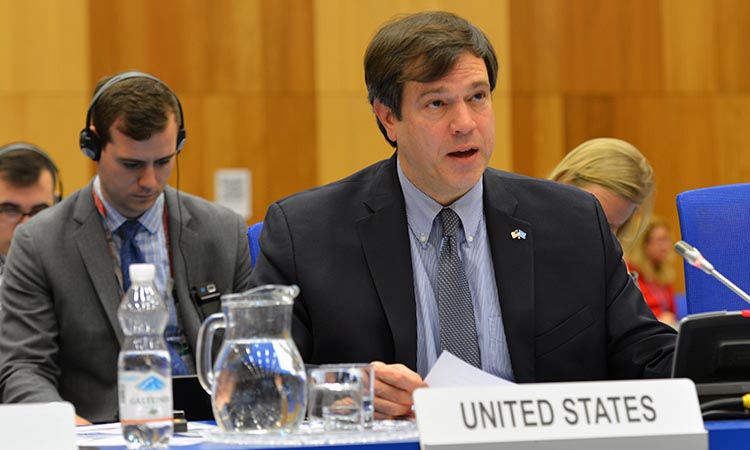 Agenda Item 11:  Any Other Business

Thank you very much, Mr. Chairman.

Mr. Chairman, first, the United States welcomes the progress achieved over the past year to strengthen the global nuclear security framework.  We applaud the IAEA’s continued efforts and emphasize the importance of the Agency’s role in coordinating nuclear security assistance to meet the growing requests from Member States.  All our efforts together strengthen individual State nuclear security regimes that govern the security of all nuclear materials around the world, and improve the ability to prevent, detect, and respond to potential acts of nuclear terrorism.

Recognizing that responsibility for nuclear security rests with the State, nine Member States have now released INFCIRCs containing commitments their government and other likeminded governments have made to take action on various aspects of nuclear security.  We have highlighted these before, and we continue to encourage all States to subscribe to as many as possible.  We would like to highlight, in particular, two INFCIRCs released since our last Board meeting.  These are:

We invite all Member States to subscribe to the goals and commitments in these INFCIRCs, and to join the Nuclear Security Contact Group, as described in INFCIRC/899.  Member States wishing to subscribe to a particular Joint Statement should notify the lead Member State of that INFCIRC and inform the IAEA of their intent via note verbale.

The United States also urges all IAEA Member States to attend the 2017 International Conference on Physical Protection of Nuclear Material and Nuclear Facilities, taking place here November 13-17, 2017.  The conference will provide a forum for Member States to share their experiences, difficulties, lessons learned, and good practices adopted during the implementation of INFCIRC/225/Rev.5, which is of utmost important to ensuring nuclear security globally.  The conference will also highlight the importance of the amended Convention on the Physical Protection of Nuclear Material and Facilities and we urge all IAEA Member States to ratify and fully implement the convention.

On this occasion, I would like to renew our appreciation to the Secretariat for its support and for providing guidance and assistance to all Member States.

Moving to another subject, Mr. Chairman, I would like to respond at this time to comments made by a number of speakers with regard to weapons of mass destruction free zone in the Middle East.

The United States has always supported the long-term goal of a Middle East zone free of weapons of mass destruction and delivery systems.  We remain convinced that direct, inclusive dialogue between the regional states is the only path to building the trust and confidence necessary to advance this long-term goal.  Unfortunately, as we see every day, the region is far from achieving essential conditions for such a zone, including a comprehensive and durable peace, and full compliance by all regional states with their arms control and nonproliferation obligations.  In this regard, Syria’s refusal to cooperate with the IAEA to remedy its longstanding safeguards noncompliance remains a significant obstacle, as does Syria’s disregard for its other weapons of mass destruction related commitments.  Sadly, the region also remains far even from establishing the prerequisites for meaningful dialogue, such as mutual recognition, direct relationships, confidence, and trust.  We urge the regional states to adopt a pragmatic and constructive approach to this issue, and to reengage directly with all their regional neighbors on an agreed path forward.  We stand ready to work with the co-conveners Russia and the United Kingdom to support direct regional dialogue based on the principles of consensus and mutual respect.

With regard to the comment made by a previous speaker related to the conclusion of the 2015 Non-Proliferation Treaty Review Conference, I would just reiterate at this time that as it was stated, multiple times, the proposed text was incompatible with the need for an inclusive consensus-based process, which is the accepted norm for such zones, and as such was clearly not an acceptable basis for future agreement.  That is why, unfortunately, the conference was not able to reach consensus concerning the terms for convening a conference on the Middle East Zone free of weapons of mass destruction.

Moving to the subject of Israeli nuclear capabilities, which has also been raised in this Board of Governors, The United States regrets that the issue of so-called “Israeli nuclear capabilities” has once again been raised in the Board, as Israel has not violated any agreements with the IAEA, and is a longstanding and substantial contributor to the Agency’s technical work.  Divisive and politically-motivated statements aimed at singling out one state for criticism do nothing to advance our shared, long-term goals of NPT universality or of a Middle East free of weapons of mass destruction and delivery systems.  On the contrary, such statements only serve to undermine the trust and confidence necessary to achieve meaningful progress toward those goals.  We encourage all regional states to pursue constructive avenues for advancing these shared goals, rather than repeating the same, politicized debates.

Mr. Chairman, another topic that has been raised in this Board of Governors is the Agency’s Low Enriched Uranium Fuel Bank.  The United States has been a longtime supporter and donor actively involved in the development of the LEU Bank since its inception.  But we still have concerns regarding the LEU procurement plan for the Bank.  We believe these can be resolved, and we look forward to working with the Secretariat toward that end.

In this regard, we note that in GOV/2010/70, the Board approved supply of LEU from the Bank based on Article III of the Model Supply Agreement, which recognizes that the supply of LEU shall be subject to conditions necessary for the IAEA to implement its obligations to the Member State where the LEU originated.

We urge the IAEA to ensure that the procurement process for LEU used in the Bank is fair, competitive, and open to all potential suppliers in a manner that provides equal opportunity for all suppliers to supply LEU to the Bank.

Mr. Chairman, at this time I would like to join others in saying a few words regarding Director General Amano’s reference in his opening remarks to the letter he received from the President of the United Nations Conference to Negotiate a Legally Binding Instrument to Prohibit Nuclear Weapons, inviting the Agency to be represented at negotiations in New York starting today.

Given the well-known divisions between IAEA member states on the issue of the proposed treaty negotiations, it was clearly both appropriate and we believe necessary for the Director General to bring this invitation to the attention of the Board, and we commend him for his commitment to transparency and inclusiveness in this area.

We are all acutely aware of how sensitive this issue is for many member states, and it would have been unprecedented and unwise for the IAEA to allow itself to become involved in such a controversial and divisive initiative without first inviting input from member states.  Especially considering the many questions, significant questions, related to the role, mandate, and resources of the agency that we have heard expressed today.

Mr. Chairman, the United States is convinced that this is not the proper forum to debate the merits of the initiative to negotiate a legally binding instrument to prohibit nuclear weapons.  The views of the United States on this initiative are well known and well documented, and we feel no need to reiterate them here, although I will be happy to talk to anybody afterwards outside if they are unclear.

But what has become very clear today is that the Ban initiative and the current effort to involve the agency are very divisive and neither initiative enjoys anything close to consensus among IAEA Member States.  Involving the IAEA in such a highly divisive issue would undermine the spirit of consensus that has been instrumental to the important technical work of this Agency.  It would put at risk our ability to come together to meet critical future needs on a wide range of issues of importance to all IAEA member states.  This deep concern which is shared by many Member States should not be taken lightly.

In summary, Mr. Chairman, my government cannot support the participation of the IAEA, or any of its representatives, in negotiations related to the treaty initiative or any other contribution by the IAEA to, or involvement in, this initiative.

Finally, on a more personal note, as one of the three initial troika organizers of the International Gender Champions initiative, I want to thank the DG for his participation in the launch of that initiative yesterday.  I also want to thank the many Members States who were represented there at the Chief of Mission level and by staff.  It was a very successful event.  And, as the DG and others noted in their comments, now is when the hard work begins of actually implementing the commitments that many of us have made.  Along these lines I would also like to thank the Australian, UK, and Mexican Missions for their efforts to put together the Women in Nuclear initiative, which we see as a complementary initiative that we are also very happy to support and look forward to working together with them.