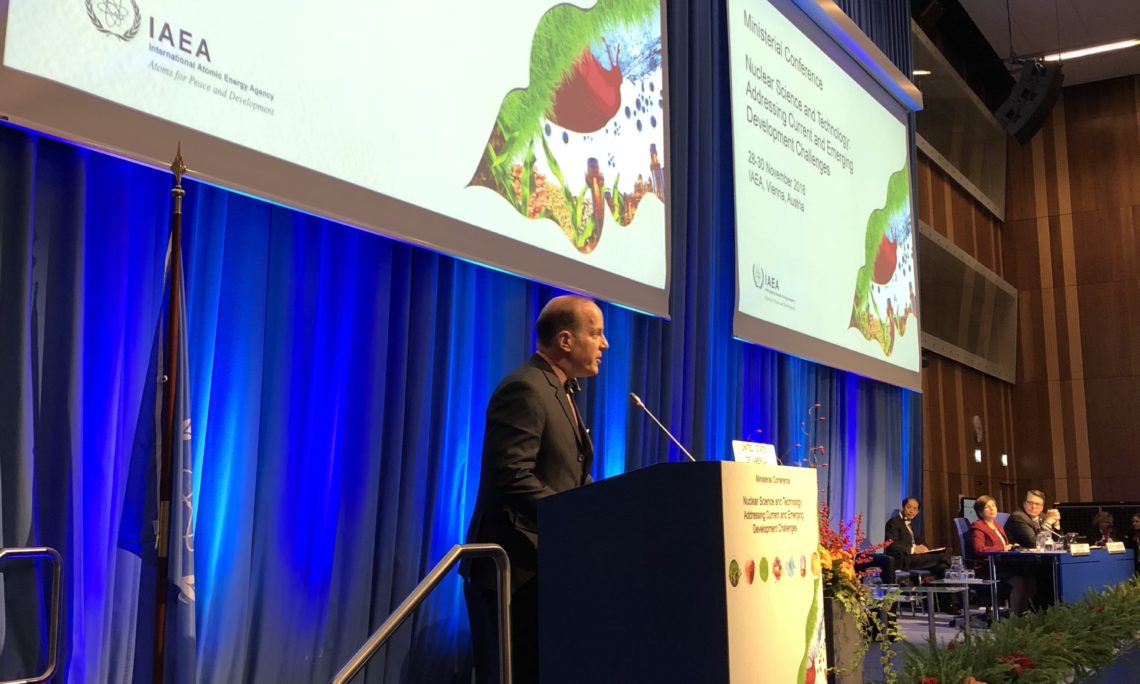 The Hon. Christopher A. Ford, Assistant Secretary of State for International Security and Nonproliferation

Nuclear Technical Cooperation: Benefits from the Nonproliferation Regime for the Developing World

Distinguished Co-Chairs, Excellencies, and ladies and gentlemen, the United States is pleased to attend this conference, for as we all approach the 50th anniversary of the entry into force of the Treaty on the Non-Proliferation of Nuclear Weapons (NPT), it is very important to reaffirm our shared commitment, indeed the shared commitment of all NPT States Party to expanding the benefits available to mankind from the peaceful uses of nuclear science and technology.

I.  The Nonproliferation Regime Enables Sharing

As we reaffirm our commitment to this goal, however, we must also remember the degree to which these benefits have depended in the past, and the degree to which they will continue to depend in the future, upon the ability of all involved to have confidence that such sharing will not result in the spread of dangerous capabilities to proliferator regimes or to non-state actors.  All of the good work done in sharing the benefits of nuclear technology, in other words, is built upon a foundation provided by the global nonproliferation regime – that is, upon the various safeguards and nonproliferation protections, and the standards of nuclear safety and nuclear security, that help ensure that it is safe to share the nuclear materials and the know-how that contribute to economic development, to health, and to human flourishing in so many ways and in so many countries, as you all know.  In addition to providing powerful security benefits to all, therefore, the nonproliferation regime is a critical enabler for sharing the benefits of nuclear technology, giving all of us – and particularly those nations that stand to benefit from such sharing – even more reasons to be thankful for that nonproliferation regime and remain dedicated to maintaining it.

I know that these points are obvious ones, Distinguished Co-Chairs, but we feel it is important to reaffirm them nonetheless, for in an era of global divisiveness it is vital to remember the degree to which we all still share interests in protecting and advancing the nonproliferation regime and the system of peaceful nuclear sharing that depends upon that regime’s integrity.  To that end, I hope you will permit me to say a few words about the United States’ commitment to this system of sharing nuclear technology and about some of the successes that this system has had over the years.

I’m proud to say that the United States is the single largest contributor to IAEA Technical Cooperation (TC) activities in support of peaceful nuclear uses.  Since 2010 alone, we have provided voluntary, extra-budgetary contributions totaling more than $374 million to promote peaceful nuclear activities through the IAEA.  In addition, we have also provided significant in-kind contributions, through training and direct technical assistance to the IAEA and to its Member States.  We are proud of how our voluntary funding has contributed to TC programs that help people all around the world in arenas as diverse as human and animal health, water resource management, public safety, nuclear power infrastructure development, medical patient and worker radiation safety, agricultural productivity, and food security.

Indeed, the United States is not just the largest contributor to such work, but also by far the largest contributor.  From 2011 through 2017, for instance, we contributed nearly a third of the IAEA’s total extrabudgetary TC revenue – which was more than the 11 next most generous Member States, not just individually, but combined.  In 2018 alone prior to today, the United States made allocations totaling over $2.8 million through the IAEA Peaceful Uses Initiative (PUI) to Nuclear Sciences and Applications (NA) Department projects.  These funds are helping the Agency do such things as fight plant pests, eradicate tsetse flies, combat animal diseases, tackle the challenge of marine plastics, improve seafood safety, and study the ways to mitigate the effects of ocean acidification on the marine environment and along coastal communities.  At this year’s General Conference, we also announced a $1.1 million extrabudgetary contribution to help the IAEA build a new energy center to power its Nuclear Applications Laboratories that assist Member States in building capacities to reap the benefits of the peaceful uses of nuclear energy.

So we are very proud of this legacy of generosity and of commitment to peaceful nuclear sharing.  But we are not simply resting upon our laurels.  We are continuing this legacy of generosity and this commitment.  And so, Distinguished Co-Chairs, I am pleased today to announce an additional $1.7 million U.S. voluntary contribution to the Renovation of the Nuclear Applications Laboratories to help the Agency meet its current 3.75 million euro ReNuAL Plus fundraising goal.  These funds will help ensure that the renovated labs are completed, fully equipped, and fully operational on schedule and without unnecessary cost increases.  Nor is that the only thing I have to announce today.

As you may recall, distinguished co-chairs, in 2016, the United States provided nearly $4 million in a grant that has allowed the IAEA to accelerate its Sterile Insect Technique (SIT) research against mosquitoes that transmit diseases such as the Zika virus.  All of which makes me very pleased to be able also to announce today that we are giving an additional $1.4 million in U.S. voluntary contributions in order to help the Agency continue its SIT laboratory-based research and to test its SIT findings in the field, as the Agency transitions the overall research effort to its newly constructed Insect Pest Control Laboratory (IPCL) for long-term sustainability.  These two new voluntary contributions are additional examples of how the United States promotes sharing the peaceful uses of nuclear science and technology in very concrete ways.  We are grateful to the other donors to the Agency’s ReNuAL project and to SIT activities, and we urge others to join us in becoming donors.

III.  Successes over the Years

I am sure all of my counterparts present here today know full well the degree to which the TC program depends upon U.S. contributions, so I will not belabor the point.  What I would like to do, however, is to point out some of the successes that the program has had over the years in providing benefits to states all around the world.

Our shared commitment to the nonproliferation regime, and to the nuclear technology cooperation that depends upon it, is in no way merely a theoretical point.  This commitment has provided great benefits to real people in real places for many years, and it is poised to continue doing so for a long time to come.  This is something of which we should all be very proud.

A.  Latin America and the Caribbean

So let me offer some lessons from the history of the IAEA’s TC Program, drawn from its own records.  Many of these programs draw on the expertise of the Department of Nuclear Sciences and Applications, the focus of this week’s conference.  In Latin America, for instance, the TC program has provided tremendous benefits:

The global nonproliferation regime has benefited people in these countries in such concrete ways.  Personally, I find it exciting to remember these examples of the concrete and diverse ways that the TC program exists precisely in order to keep providing such successes.

But of course the countries of Latin America are not alone in having benefited so greatly from the TC program.  As another example, the countries of the African continent have received many benefits as well.

C.  Asia and the Pacific

Further examples of the benefits of IAEA TC activities can be found in Asia and the Pacific.

Finally, let me highlight just a few examples of how European countries have also benefited from IAEA TC activities.

These successes are tangible examples of our shared commitment to the IAEA’s peaceful uses program and to the foundation of safeguards, safety, and security practices that make such sharing possible.

Distinguished Co-Chairs, I have only scratched the surface of the TC program’s successes over the years.  Were there time, there is much more that could be said about excellent results that have been achieved through collaborations in or involving many other countries.  As we head toward the Golden Anniversary of the NPT’s entry into force, we need to keep these many successes very much in our minds.  For they demonstrate what it is possible to achieve when international partners have assurance that nuclear technology and materials can be safely and freely shared within a framework that protects against diversion, loss, accident, and theft.  The TC program builds upon the sound foundation provided by the nonproliferation regime – including not just the NPT itself but also the various nuclear safeguards, export control standards, and nuclear safety and security best practices that constitute that regime.

As we meet here today at the IAEA’s Ministerial Conference on Science and Technology, Distinguished Co-Chairs, we obviously thus have a proud legacy to continue.  All the countries I have mentioned today have the solidity and integrity of the nonproliferation regime to thank for these TC successes.  We should proudly remember all this progress, and we should rededicate ourselves to protecting and enhancing that solidity and integrity, so that all mankind will be able to continue to share in the benefits of nuclear science and technology in the future, as has thankfully been possible in the past.

Thank you very much, Distinguished Co-Chairs.