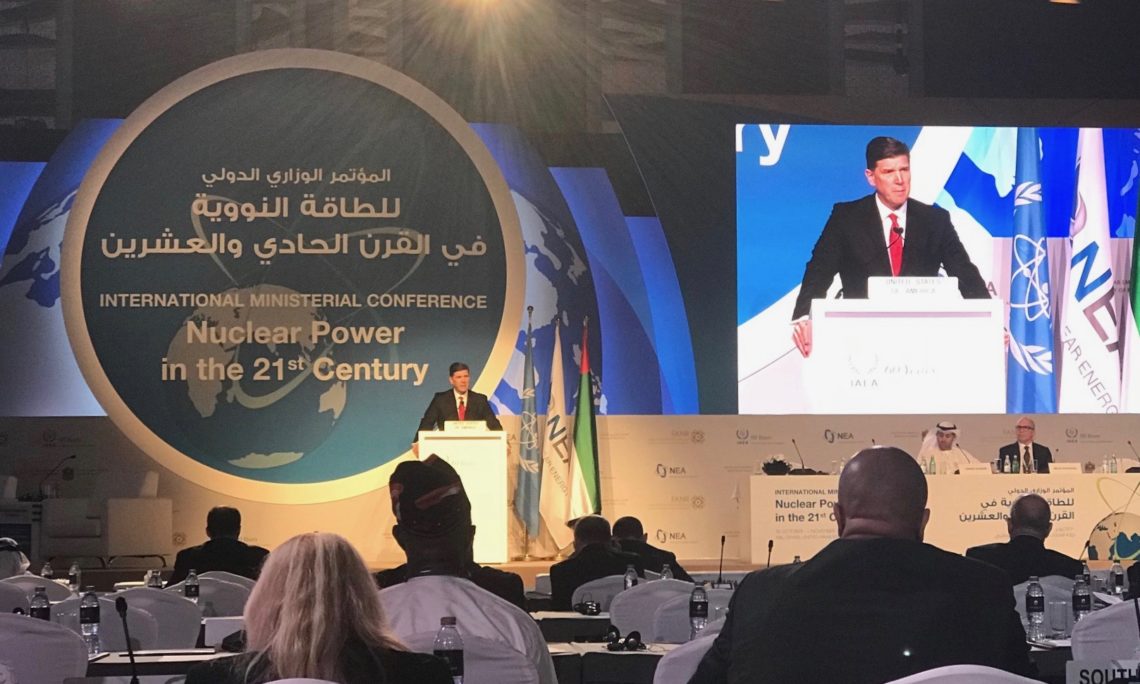 International Ministerial Conference on Nuclear Power in the 21st Century

On behalf of the United States Government, and in particular Secretary of Energy Rick Perry, I would like to sincerely thank the Government of the United Arab Emirates, our host, and the International Atomic Energy Agency (IAEA), led by Yukiya Amano, in cooperation with the Nuclear Energy Agency of the OECD, for convening this important conference in the beautiful city of Abu Dhabi.

For the past six decades, the IAEA Member States have made great strides in promoting the peaceful use of nuclear technology and developing nonproliferation norms. Strong partnerships between our nations and respect for these norms are vital to achieving our shared goals of harnessing nuclear energy for peaceful purposes.

The United States, through partnerships including the IAEA, is proud to play a leading role in promoting the peaceful use of nuclear energy in a broad range of profoundly important applications. These range from serving as a key clean source of electricity to playing key roles in the fields of medicine, agriculture, industrial, and even space exploration!

We play this a role because we know first-hand the benefits of nuclear power in the United States every day. Nuclear energy is an essential source of safe, clean, reliable, and affordable power. It is also a resilient baseload energy source, supplying electricity 24 hours a day, 7 days a week, for 18 months or more without having to be refueled or shut down—even in extreme weather conditions.

In 2016, nuclear energy accounted for 19.7 percent of U.S. electricity. The U.S. nuclear industry also provides hundreds of thousands of competitive, high-paying jobs, and serves as a worldwide leader in nuclear technology and safety.

Longstanding U.S. commitment to the peaceful uses of nuclear energy recently was reaffirmed by President Trump. The President stated that the U.S. will take steps to revitalize and expand our nuclear energy sector, and called for a comprehensive review of our Nation’s nuclear energy policy to achieve this goal. We are now vigorously moving out, I can assure you of that!

As part of this effort, the Administration is also working to remove market barriers, provide for a more business friendly regulatory environment while maintaining the same high-level standards of safety and security, and strengthen private-public partnerships. Our commitment to the U.S. nuclear energy sector not only extends to our U.S. domestic market, but also to U.S. nuclear exports and commercial partnering opportunities, such as in this region with the U.A.E. and the Kingdom of Saudi Arabia.

The U.S. Government, in partnership with U.S. industry, is advancing nuclear energy technologies through targeted early-stage investments to ensure a strong domestic and global industry now and into the future. We are proactively supporting entry into the market of advanced reactors, including advanced small modular and even micro reactors, to promote the next generation of safe, affordable, and innovative technology. By leveraging our world-class national laboratory system, we are developing an advanced nuclear infrastructure for the 21st century, building a resilient supply chain, and promoting a strong nuclear pipeline of new advanced reactors.

To further enhance public acceptance of nuclear power and facilitate international civil nuclear cooperation, we also need to demonstrate our commitment to safety by agreeing to common legal frameworks, such as the Nuclear Safety Convention and the Convention on Supplementary Compensation for Nuclear Damage.

As reflected in the basic understanding of the Nuclear Nonproliferation Treaty, the pursuit of peaceful uses of nuclear energy must be accompanied by adherence to nonproliferation obligations. The IAEA serves a critical role in monitoring such obligations around the world.

Among its many other responsibilities, the IAEA is entrusted with monitoring Iran’s nuclear program, and we extend our appreciation to the Secretariat for their excellent work and continued professionalism. The United States supports these efforts and strongly encourages the IAEA to exercise its full authorities to verify Iran’s adherence to each and every nuclear-related commitment under the Joint Comprehensive Plan of Action. We will not accept anything short of Iran’s strict compliance with its obligations. And we would welcome the IAEA’s return to North Korea, should that state finally choose a path of peace instead of nuclear provocation.

Also critical to the success of nuclear power are international efforts to prevent both the theft of nuclear material as well as the sabotage of nuclear facilities by terrorists. The IAEA is central to this effort and we must work together to continually improve nuclear security on a global level to help ensure that all nuclear and radiological material and facilities are protected from theft or misuse by terrorists.

As part of this effort, all States should adhere to the Convention on the Physical Protection of Nuclear Materials and Nuclear Facilities, the only legally binding international instrument in the area of physical protection of nuclear material, and subscribe to and implement the Joint Statements that arose from the December 2016 IAEA International Conference on Nuclear Security.

The United States looks forward to continuing to work with the international community and industry on supporting the use of nuclear energy as a clean, resilient source of energy in a manner that is safe, secure, and consistent with the nonproliferation goals we all share.