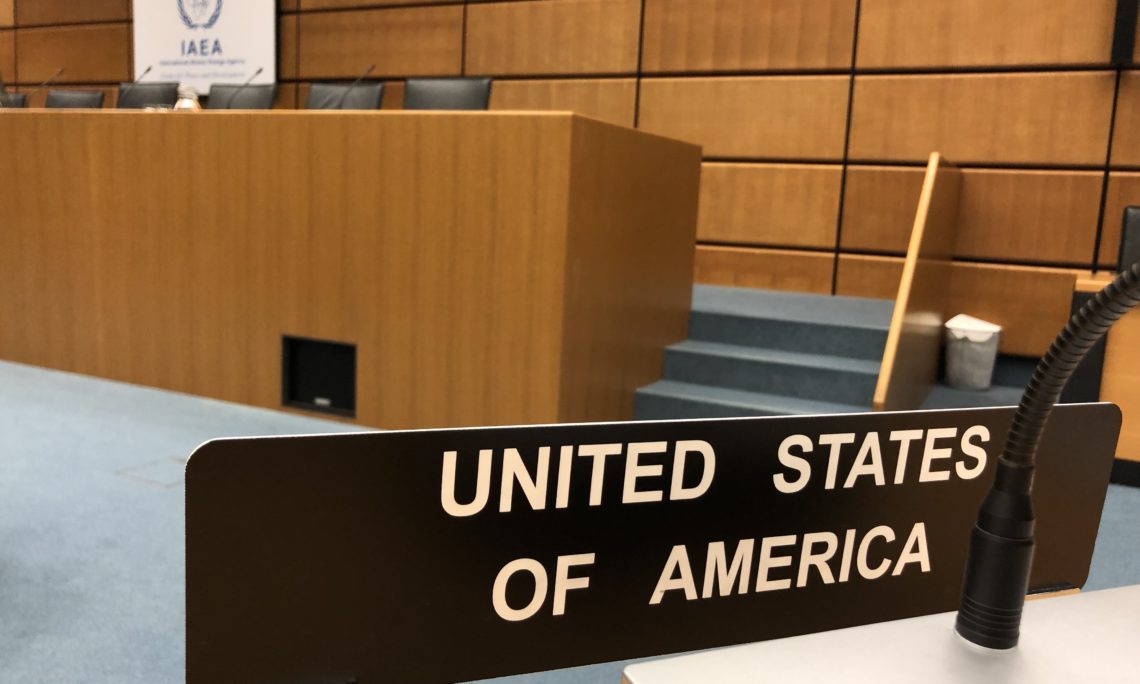 United States placard in IAEA Board of Governors plenary before the start of a meeting.

U.S. Statement to the IAEA Board of Governors on Agenda Item 5: Verification and Monitoring in Iran

The United States welcomes the Director General’s May 31 report on verification and monitoring in Iran. We once again extend our appreciation to the Director General, the Deputy Director General for Safeguards, and their staff for their continued professionalism and dedication in carrying out their responsibilities. The Secretariat can continue to count on the full support and confidence of the United States as it implements the Agency’s important mandate in Iran. The Director General’s thorough and factual reporting on Iran’s nuclear activities remains essential for the Board to continue accurately assessing Iran’s implementation of its safeguards obligations and nuclear commitments.

The United States has made clear why we ended U.S. participation in the JCPOA last year. We will not repeat those reasons here today. President Trump has repeatedly underscored that our goal is to conclude a comprehensive deal with Iran that addresses our concerns, reins in its destabilizing behaviors, and fully reintegrates Iran into the international community. U.S. Secretary of State Pompeo has made clear that he is willing to negotiate with Iran without preconditions, and we are offering Iran the possibility of a full normalization of relations. To win relief from sanctions pressure, however, Iran must be willing to end its malign behavior and take lasting steps that deny it any pathway to nuclear weapons.

Unfortunately, Iran’s announcement on May 8 that it will cease performing key nuclear commitments is very unhelpful and of concern in this regard, underscoring the continuing challenge Iran poses to international peace and security, and the need for a new agreement that enduringly ends the proliferation threat Iran presents. Iran will find that nuclear escalation of the kind it now threatens will only lead to further isolation and pressure. The path forward is clear: Iran must return to the negotiating table and cease its destabilizing actions. Attempting to generate negotiating leverage one kilogram of uranium at a time will not bring sanctions relief. If Iran wishes to deepen its economic and political isolation, it identified the fast track there on May 8. The international community has repeatedly made it clear it would be unacceptable for Iran to break its nuclear commitments. Now is the time to ensure that Iran understands we all meant it.

We also note with significant concern that the Director General was unable to state in his report, as he has consistently in past reports, that Iran’s enrichment research and development has been conducted “within the limits defined in the JCPOA.” The troubling developments with respect to Iran’s operation of new IR-6 centrifuges, as reported in the DG’s report and technical briefing to member states, show the reason that this phrasing about Iranian compliance had to be dropped. Iran, this report makes clear, is already violating a key commitment related to centrifuge research and development. Iran has claimed that it continues to comply with the JCPOA, but it is now reported to be in clear violation of the deal.

This should be of great concern to all of us. The United States calls on Iran to return to compliance without delay. We understand the JCPOA Joint Commission is treating this issue with the seriousness it deserves, and we urge the JCPOA participants to address this issue as soon as possible. The Board of Governors should also follow this issue closely and with concern, and speak with one voice in calling on Iran to cease all activities inconsistent with its commitments and in working to ensure that it does so.

In addition to addressing immediate compliance concerns, as we look toward a comprehensive deal that solves the Iranian proliferation crisis, we emphasize that Iran must also address why it retained an immense archive of materials from its past nuclear weapons program. This archive raises an obvious question for all of us. Why did Iran seek to preserve this information and expertise, if not to keep its nuclear options open – perhaps once the so-called “sunset” of key JCPOA commitments had allowed it to position itself within a quick sprint to weaponization? This question, and the many other unanswered questions that remain about Iran’s past work and future intentions, highlight the importance of Iran finally coming to the negotiating table in good faith, to answer these questions, resolve all such concerns, and agree to the terms that put such proliferation threats forever behind it. These are matters of direct relevance to the IAEA’s current work, and critical to how we approach verification issues in a new deal going forward.

It is in this context, and according to standard safeguards practices, that we support the IAEA’s continued, careful assessment of the Iranian nuclear weapons archive materials. Given the significance of the matter, it is important that the Agency work independently and professionally to review these materials, in combination with all other available information, and act upon any credible information that raises a safeguards-relevant question or inconsistency. It is only through such action, and Iran’s full cooperation with any such requests, that international confidence can be established and maintained in support of a diplomatic resolution to the international community’s concerns about Iran’s nuclear program.

Nothing short of full Iranian cooperation will allow the IAEA to assure the international community that Iran is upholding its obligations and commitments. It is incumbent on all of us to make clear that Iran can be given no option but to provide timely and proactive cooperation with all IAEA requests in the exercise of the Agency’s mandate and professional judgment. Full cooperation with the IAEA must be the norm, and Iran should not need a quarterly reminder of its importance.

We welcome the Director General’s statement that the IAEA continues to evaluate Iran’s declarations under the Additional Protocol, and confirmation that it has conducted complementary access inspections under the Additional Protocol to all sites and locations in Iran that its inspectors have so far needed to visit. The IAEA has the authority to request access to any location in Iran – civil or military – to verify Iran’s declarations under its Additional Protocol and Comprehensive Safeguards Agreement when a question or inconsistency has arisen. The IAEA has a fundamental responsibility to pursue any new concern about undeclared nuclear material or safeguards-relevant activities in all states under IAEA safeguards, and we have full confidence that the Agency and its highly skilled and professional inspectors will do so appropriately.

We have long underscored the importance of adequate resources in support of the IAEA’s crucial monitoring role in Iran. The United States welcomes the numerous pledges of financial support for the IAEA’s verification and monitoring efforts in Iran, augmenting regular budget resources. We must all continue to ensure that while pursuing IAEA’s vital responsibilities in Iran, we are also able to support fully the Agency’s other essential tasks globally in safeguards, security, safety, and the peaceful uses of nuclear energy.

With these comments, the United States welcomes the Director General’s report contained in document GOV/2019/21, and requests that the report be made public.