Home Home | News & Events | U.S. Statement to the IAEA Board of Governors: Implementation of the NPT safeguards agreement in the Syrian Arab Republic 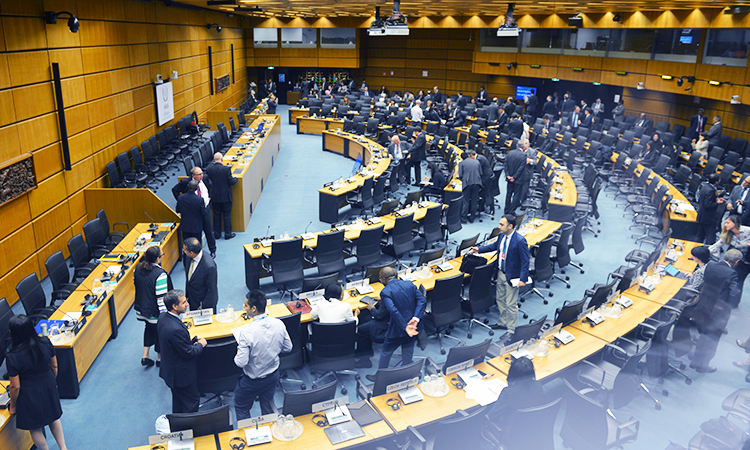 View of the boardroom at the IAEA Board of Governors

Chair,
The United States thanks the Director General for his latest report on the implementation of safeguards in Syria, and for the Secretariat’s continued professionalism in addressing Syria’s longstanding safeguards noncompliance in the face of persistent obstruction by the Assad regime and its patrons.

Chair,
Unfortunately, the contents of the Director General’s recent report should come as no surprise to anyone here. Indeed, the underlying facts of this case have not changed in the more than seven years that have passed since this Board found Syria to be in noncompliance with its safeguards agreement. The Director General’s latest report once again reaffirms the Agency’s May 2011 assessment that the facility destroyed in September 2007 at Dair Alzour was very likely a clandestine nuclear reactor that should have been declared to the IAEA. As the IAEA reported at the time, the facility had features comparable to the gas-cooled, graphite-moderated, plutonium-production reactor at Yongbyon in the DPRK. The Agency’s factual findings in this regard point to a clear and unsettling reality that has been readily apparent for many years – that, as of 2007, Syria was working covertly with North Korea to build an undeclared reactor ideally suited for the production of fissile material for nuclear weapons.

Chair,
The pattern of Syrian behavior documented in the report is also regrettably familiar. Over the past seven years, rather than cooperating in good faith with the IAEA, Syria has continually opted for the path of obfuscation and delay – portraying itself as the victim of a political smear campaign and propagating ill-founded, repeatedly debunked allegations against other Member States. Despite Syria’s professed willingness to work with the Agency to address the substantive basis of its noncompliance, the DG’s latest report confirms that Syria has not provided any substantive information to the Agency regarding the Dair Alzour facility or related sites since May 2008 – more than 10 years ago.

We welcome the DG’s confirmation that Agency inspectors were able to conduct a routine physical inventory verification at Syria’s declared miniature neutron source reactor outside Damascus. But we underscore that such an inspection in no way addresses ongoing questions and concerns regarding Syria’s undeclared activities at Dair Alzour that prompted this Board to find Syria in noncompliance. Despite cynical suggestions to the contrary, routine safeguards implementation at a declared nuclear facility does not absolve the Assad regime of responsibility for its past undeclared nuclear activities.

Chair,
Syria’s excuses and false arguments have worn painfully thin. If Syria is willing to cooperate with the Agency, why has it still not done so after more than seven years? If Syria’s claims regarding the facility at Dair Alzour are true, why has the regime been unable to provide any substantive information to the IAEA verifying its self-exonerating claims? Unfortunately, the answer to these questions is clear – Syria has no intention of working cooperatively with the Agency to address these concerns. Instead, Syria is content to indefinitely delay and obstruct substantive discussion of this issue, relying on the protection of its patrons, with the hope that the Board will eventually lose interest in the file.

Chair,
Syria must not succeed in its cynical stonewalling. We cannot allow safeguards noncompliance by any country to merely fade into our collective memory or be written off due to the passage of time or intransigence on the part of the noncompliant state. Compliance by all states with obligations under the Nuclear Non-Proliferation Treaty and IAEA safeguards agreements is essential to the shared security benefits enjoyed by all Parties under the NPT. As such, all cases of noncompliance must be treated with the utmost seriousness and urgency. The lack of recent developments should be cause for increased scrutiny of this issue by the Board, not less. This requires continued, regular reporting from the Secretariat, and discussion of the issue at every Board meeting. Reducing the frequency of Agency reporting or removing Syria from the Board’s agenda would send a dangerous signal that states that violate their safeguards obligations need only wait for the Board to lose interest.

Chair,
There is only one path to resolving these concerns – Syria must cooperate with the Agency and provide it with access to all information, sites, materials, and persons necessary to verify the exclusively peaceful nature of its nuclear program. This includes access to the three sites identified by the Agency as having a functional relationship to the reactor at Dair Alzour. The ongoing conflict and instability in Syria caused by the Assad regime are no excuse for Syria’s failure to cooperate. Until Syria cooperates fully with the Agency to address these concerns, the Board must remain seized of this matter and be prepared to consider further action as necessary, including potential action under Article XII.C of the Statute. We encourage all Board members, and particularly those with influence on the Assad regime, to urge Syria to cooperate fully with the IAEA to address these longstanding concerns without delay.