Home Home | News & Events | U.S. Statement to the IAEA Board of Governors: Strengthening the Agency’s Activities related to Nuclear Science, Technology, and Applications 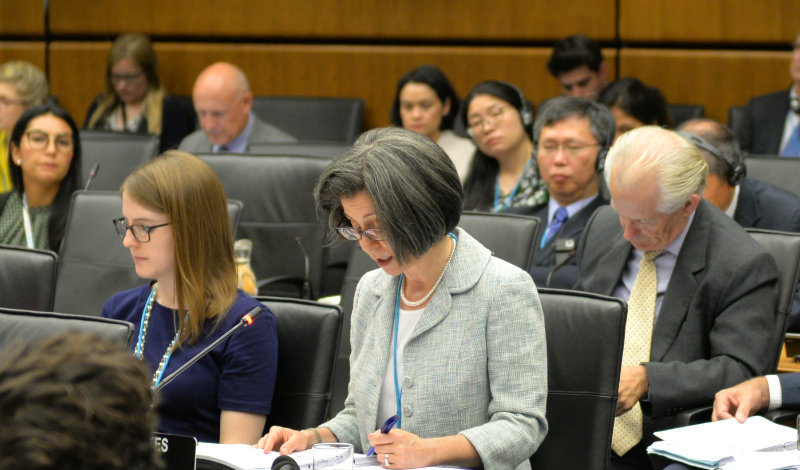 The United States thanks the Secretariat for its useful report on the IAEA’s activities related to nuclear science, technology, and applications in 2017. We look forward to the November 2018 Nuclear Science and Technology Ministerial Conference, an event that will allow the Agency to highlight the successes mentioned in the DG’s report and to identify opportunities to build on them in the future.

Providing voluntary funding to support peaceful uses through the IAEA is one of the concrete ways the United States demonstrates its commitment to promoting the peaceful uses of nuclear energy in accordance with Article IV of the NPT and in support of development goals. By promoting high standards of nuclear safety and security, alongside rigorous and effective nonproliferation measures, we seek to promote the fullest possible exchange of nuclear technology for peaceful purposes as called for in the NPT. Since 2010, we have provided voluntary contributions totaling more than $368 million to the IAEA to promote peaceful nuclear activities. This includes almost $96 million provided to the IAEA Peaceful Uses Initiative (PUI). We urge others to contribute through the PUI and other voluntary funding mechanisms, and to help the Secretariat identify and pursue funding opportunities through non-traditional donors or partners.

We note favorably the continued cooperation among the IAEA, the African Union’s Pan African Tsetse and Trypanosomiasis Eradication Campaign (AU-PATTEC), and other partners on tsetse and trypanosomiasis control, and commend the continued development of the sterile insect technique (SIT). A recent analysis of the SIT in Senegal showed clear socioeconomic benefits. In Uganda, the innovative use of remotely piloted aerial systems to release sterile tsetse flies was both cost-efficient and environmentally friendly. Important progress has been made in the application of SIT to disease-transmitting mosquitoes.

The United States welcomes the progress update on the IAEA’s efforts to fund and execute renovations of its Nuclear Applications Laboratories at Seibersdorf. We are pleased to have provided a total of approximately $15 million to this project. We look forward to continuing to work with the Friends of ReNuAL and all Member States to raise €3.75 million by the end of November. These additional voluntary funds are needed to ensure the newly built labs are completed, fully equipped, and fully operational on schedule and without unnecessary cost increases. In turn, the labs will help Member States build critical capacities far into the future in areas that include health, agricultural productivity, food safety, and the environment.

Chair,
The United States welcomes the continued interest in nuclear power throughout the world. This was evident in the outcomes of the International Ministerial Conference on Nuclear Power in the 21st Century, organized by the Agency in cooperation with the Nuclear Energy Agency of the Organization for Economic Cooperation and Development and hosted by the United Arab Emirates in Abu Dhabi in 2017. While many Member States are actively pursuing nuclear energy as a component of their energy mix, other Member States are evaluating the option of developing a nuclear power program.

The United States notes the value of the Agency’s nuclear power infrastructure and capacity-building projects. We applaud the strong extrabudgetary support for these activities, including through the PUI. It is important that the Agency continue to apply the “Milestones Approach” to support the development of nuclear infrastructure in Member States.

We welcome the completion of the first Integrated Nuclear Infrastructure Review mission for research reactors. We are also pleased that Idaho National Laboratory and Oak Ridge National Laboratory in the United States have each been designated as an International Center based on Research Reactors (ICERR).
The United States applauds the Agency’s work in supporting existing operational reactors in the areas of operating performance, management systems, plant lifetime management, human resources development, and the safe and secure management of spent fuel and radioactive waste. In this regard, we welcome the establishment of the new Technical Working Group on Nuclear Power Plant Operations.

The United States supports the Agency’s work in innovative nuclear technologies, including small modular reactors, or “SMRs,” and innovative nuclear energy systems. In this area, we welcome the Agency’s establishment of the new Technical Working Group on SMRs. The United States also supports the Agency’s activities in the area of knowledge management. These include efforts to ensure that nuclear data, information, and knowledge resources are preserved and made available to Member States. They also include efforts to strengthen networks related to nuclear education and training as well as nuclear information.

Chair,
With these comments, the United States takes note of GOV/2018/29 and requests that it be transmitted to the General Conference.