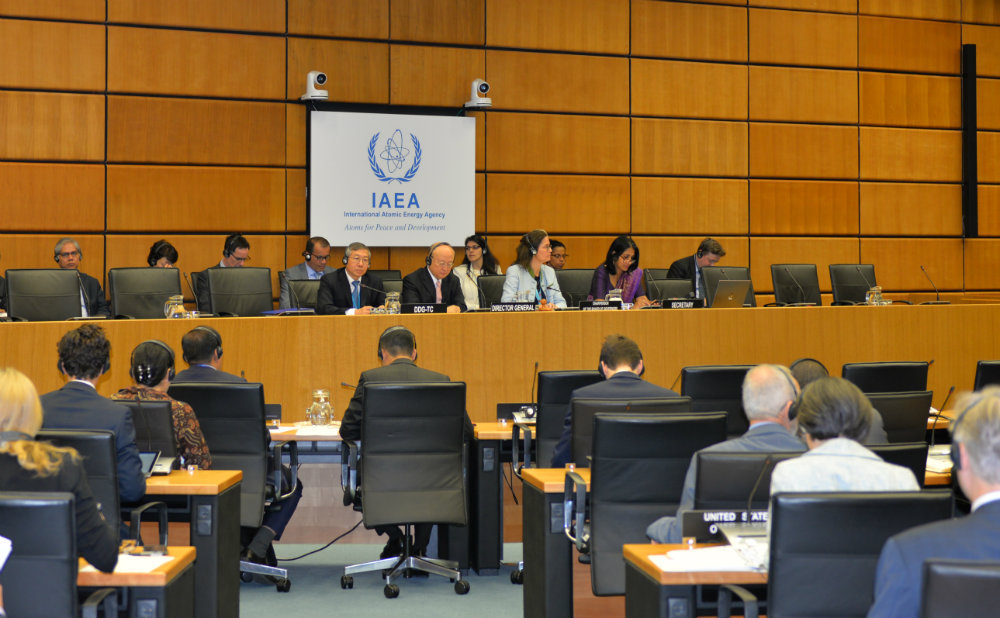 IAEA Board of Governors Meeting June 2018

Chair, the United States welcomes the Director General’s May 24 report on verification and monitoring in Iran. We once again extend our appreciation to the Director General, the Deputy Director General for Safeguards, and their staff, for their continued professionalism and dedication in carrying out their responsibilities in Iran. The Director General’s thorough and professional reporting on Iran’s nuclear activities is essential to allowing the Board to accurately assess Iran’s implementation of its safeguards obligations. We have every confidence that the IAEA will continue to carry out its responsibilities in Iran with the highest level of commitment and diligence. The Secretariat can continue to count on the full support of the United States as it implements its mandate in Iran.

Chair, I would like to briefly mention recent developments in U.S. policy toward Iran’s nuclear program. Since January of last year, the United States made clear our significant concerns with the JCPOA [Joint Comprehensive Plan of Action] and the need to address its deficiencies. Over the past year, we entered into good faith discussions with our close partners and allies to build a lasting framework that would address our concerns and allow us to remain in the deal. We were clear from the beginning, however, that should we not reach an agreement to resolve our concerns, the United States would end its participation in the JCPOA and seek a better arrangement that definitively and permanently addresses our concerns. Unfortunately, after a constructive effort with our European allies, it was clear that our concerns could not be addressed while we continued to participate in the deal.

On May 8, President Trump announced that the United States was ending our participation in the JCPOA because the deal ultimately failed to protect the American people, our allies, and our partners in the region from Iran’s continued aggressive and destabilizing behaviors. Iran’s behavior got worse under the deal, not better. Iran was emboldened and empowered to deepen its support for militants and proxies across the region, continue its development and testing of ballistic missiles, and undermine the human rights of its people.

Regrettably, the JCPOA did not put us on a path to addressing Iran’s malign conduct, or put a nuclear weapons capability permanently out of reach. Instead, it merely delayed an unacceptable expansion of Iran’s nuclear program, a program that the Director General assessed in December 2015 had previously included “a range of activities relevant to the development of a nuclear explosive device.” The dramatic Israeli announcement of Iran’s past nuclear weapons files further reaffirms this conclusion, and highlights Iran’s longstanding efforts to deny and conceal the previous military dimensions of its nuclear program.

Looking forward, the President made clear that the United States is ready, willing, and able to negotiate a new and better deal that comprehensively addresses our concerns, and fully reintegrates Iran politically and economically into the community of nations. In order to achieve this goal, Iran must be willing to change its behavior, and to take steps that demonstrate once and for all that its nuclear program will forever remain exclusively peaceful.

In addition, we welcome the IAEA’s request for clarifications under the Additional Protocol regarding Iran’s plans relevant to the development of the nuclear fuel cycle, including research and development activities for naval nuclear propulsion. Iran must fully cooperate with all IAEA requests for information and access regarding such plans, and all nuclear-related activities must be fully consistent with Iran’s safeguards obligations.

Chair, nothing short of full Iranian cooperation will allow the IAEA to assure the international community that Iran is upholding its obligations and commitments. The Director General should never again have to appeal for “timely and proactive cooperation by Iran” to “facilitate implementation of the Additional Protocol and enhance confidence.” Such cooperation must be the norm. As the Director General has made clear, the Agency has the authority to request additional information or access to any relevant location in Iran – civilian or military – if it has a credible need to verify the absence of undeclared nuclear activities.

The IAEA maintains its full safeguards authorities to investigate any new question or concern regarding Iran’s nuclear activities. This includes any potential weaponization-related issue that could reduce the Agency’s confidence in its previous assessments and assurances. Iran remains obligated to address any such issues to the IAEA’s satisfaction. Any new concern of undeclared nuclear material or safeguards-relevant activities can and must be pursued by the IAEA, and we have full confidence that the Agency and its skilled inspectors would do so appropriately.

It is in this context, and according to standard safeguards practices, that we support the IAEA’s careful assessment of the documentation Israel recently announced detailing Iran’s past nuclear weapons program and subsequent efforts to preserve that program’s information and expertise. We have the highest confidence that the IAEA will independently and professionally review these documents, in combination with all other available information, to appropriately inform its current monitoring and verification activities in Iran. As the United States noted when we joined consensus on the December 2015 Board resolution on verification and monitoring in Iran, the IAEA must continue to review and act upon any new safeguards-relevant information it receives and judges sufficiently credible to raise a safeguards-relevant question or inconsistency.

Chair,  we have long underscored the importance of robust and sustained efforts by the IAEA to continue to capably fulfill its monitoring role on the ground in Iran, and the requirement for the necessary resources to carry out these important tasks. The United States welcomes the numerous pledges of financial support for the IAEA’s verification and monitoring efforts in Iran, as well as the integration of appropriate verification costs into the regular budget. We have consistently made clear that the IAEA’s responsibilities in Iran must not detract from the Agency’s other essential tasks globally in safeguards, security, safety, and the peaceful uses of nuclear energy.

With these comments, the United States takes note of the Director General’s report contained in document GOV/2018/24, and requests that the report be made public.