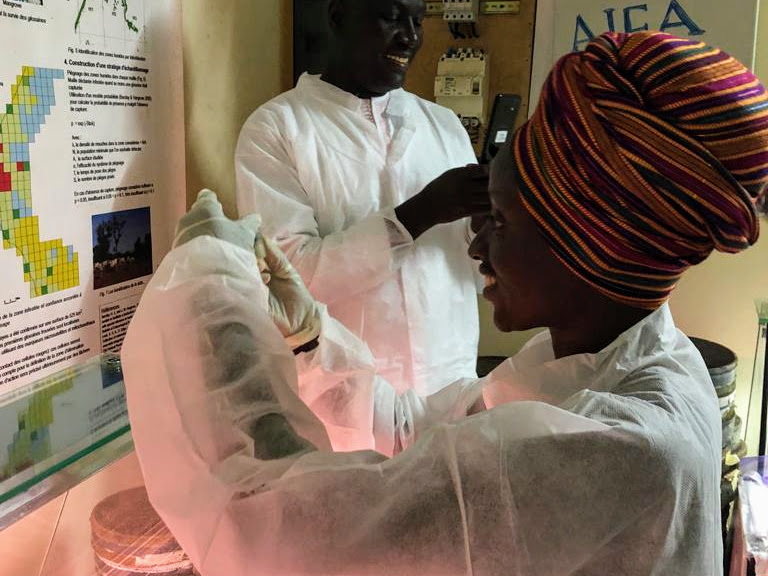 Senegalese scientists work with insects as part of an IAEA project to eradicate the tsetse fly using the environmentally-friendly Sterile Insect Technique (SIT).

U.S. Ambassador to International Organizations in Vienna Jackie Wolcott announced today that the United States is providing $436,600 to the International Atomic Energy Agency (IAEA) to improve livestock productivity in West Africa through the creation of sustainable tsetse-free zones.

Funding for this project is provided by the U.S. Department of State through the IAEA’s Peaceful Uses Initiative, which the United States helped the IAEA establish in 2010 to support IAEA activities that promote the peaceful uses of nuclear technologies.

Since 2010, the United States has donated over $5 million to the IAEA’s Insect and Pest Control project aimed at eradicating the population of tsetse flies in Senegal carrying the Trypanosomiasis disease (African sleeping sickness) using a nuclear technology called the Sterile Insect Technique (SIT).

The SIT is an environmentally-friendly insect pest control method that uses the mass-rearing and sterilization of a target pest to lower a pest population without the continued use of insecticides. It is currently being used on six continents and has been used successfully for more than 60 years.

Tsetse flies are vectors of the disease Trypanosomiasis, which afflicts not only human but also bovine populations, and presence of the tsetse fly has inhibited herd improvement and productivity in Senegal and across West Africa. However, the situation is changing, thanks to a successful tsetse fly eradication campaign involving SIT.

These efforts underline the IAEA’s relevance in affecting and improving the lives of ordinary citizens, and are important to its overall credibility and international standing.  U.S. contributions to these projects also highlight our commitment to ensuring access to the peaceful uses of nuclear energy, as stipulated in Article IV of the Treaty on the Non-Proliferation of Nuclear Weapons.

More information on use of SIT in Senegal is available on IAEA’s website: