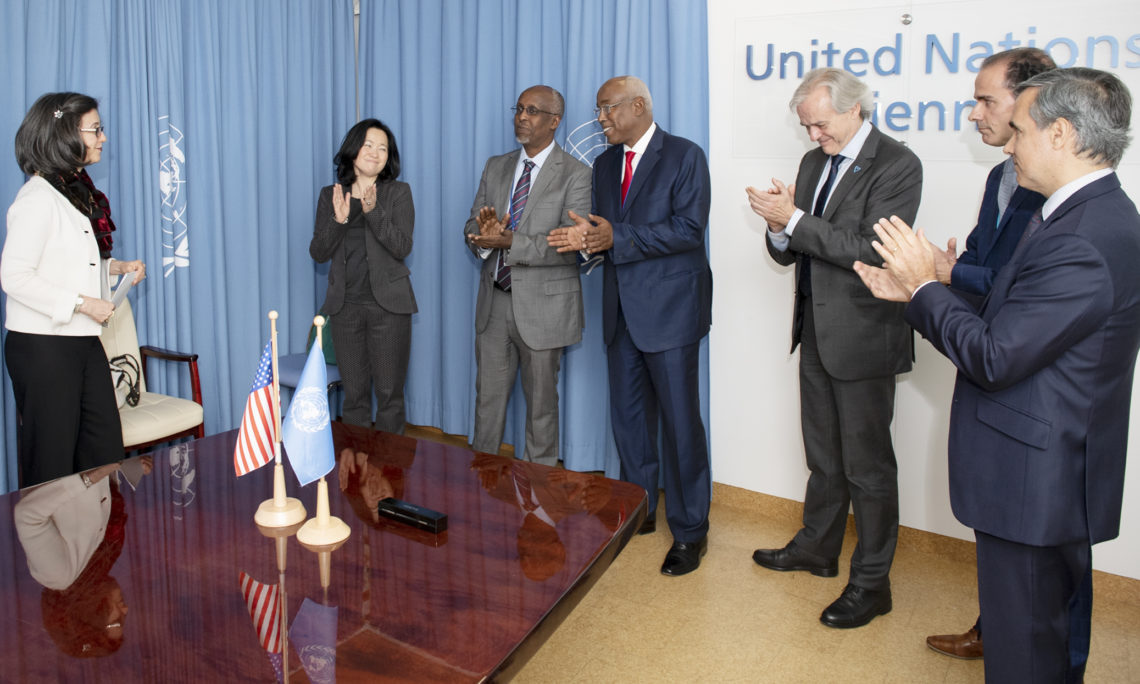 Deputy Chief of Mission Nicole Shampaine (left) looks on as UNODC and Somali officials applaud upon conclusion of the signing ceremony marking an $11.4 million U.S. contribution to support Somalia’s policing and justice efforts.

Today, in a demonstration of the continued U.S. commitment to improved security and development in Somalia, the United States announced an $11.4 million contribution to a United Nations Office on Drugs and Crime (UNODC) initiative to support Somalia’s policing and justice efforts.  This funding will allow the UNODC to further build the capacity of the Somali Police Force’s Criminal Investigations Department (CID), as well as increase and expand support to Federal Member State police investigators.

The U.S. Department of State’s Bureau of International Narcotics and Law Enforcement Affairs (INL) initiated U.S. support to strengthen the CID’s ability to investigate crime in 2015.  This assistance has constituted one piece of INL’s approximately $35 million in overall support for Somali-led efforts in the areas of law enforcement, corrections, and the rule of law.  Police and judicial reform programs are critical to supporting Somalia’s goals of creating stability and removing the main drivers of conflict.

The aim of this new U.S. contribution is to ensure that the CID’s progress achieved over the last four years will be maintained and taken forward.  The United States is pleased to be undertaking this effort in close coordination with UNODC and other international partners.  Such coordination and cooperation is critical to helping Somalia build strong institutions and pursue its objectives of improved security and development.

More information on INL support for Somalia is available on the Bureau’s website at https://www.state.gov/bureau-of-international-narcotics-and-law-enforcement-affairs-work-by-country/somalia-summary/