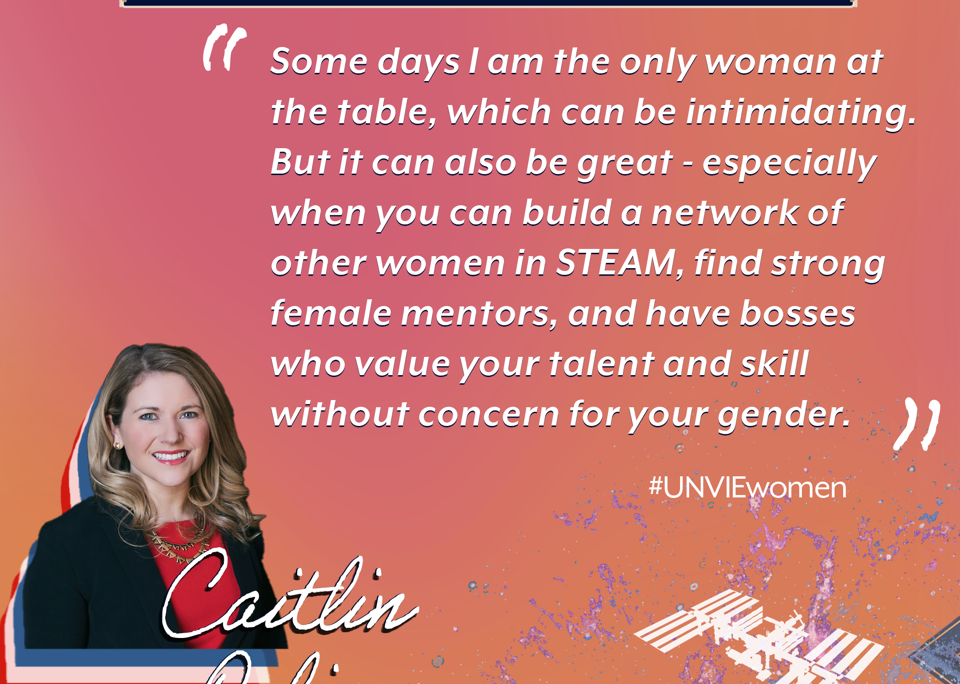 We continue our series to celebrate the accomplished and visionary women working at UNVIE with Political Assistant Caitlin Poling. Caitlin answers questions about her work, what inspired her to take up this career path, and why it’s important to promote gender equality in government and in STEAM.

Describe your job / what you do?

I work in UNVIE’s Multilateral and Technical Affairs section, where I assist on our arms control and peaceful uses of space portfolios. My day can include anything from taking notes at a multilateral meeting on outer space policy to drafting remarks for the Ambassador to deliver at a session of the Comprehensive Nuclear-Test-Ban Treaty Organization (CTBTO) to arranging an event to bring fellow diplomats together.

How did you decide on this career path?

This is actually a second career for me. Before moving to Vienna, I spent the past decade working in Congress and foreign policy and defense think tanks. Starting to learn French at the age of four sparked an interest in the world around me. That interest led me to study international studies, international business and French in undergrad and pursue a master’s degree in international security studies. Since middle school I had a goal to become an ambassador, so I’m excited be working in a U.S. mission overseas.

What is it like being a woman working in a STEAM field?

To be honest, sometimes it can be tough. Going into multilateral meetings, I can sometimes feel that I’m taken less seriously than my male colleagues and that I must prove myself and my expertise. Some days I am the only woman at the table, which can be intimidating. But it can also be great – especially when you can build a network of other women in STEAM, find strong female mentors, and have bosses who value your talent and skill without concern for your gender.

Why is it important that women work in STEAM fields?

The same reason it’s important that women work in any field – we are half of the population, and we should see a more equal representation. While we still have a long way to go, it’s great to see more women advancing in these fields. Much like in the STEAM field, when I started working on defense in the U.S. Senate the majority of my colleagues were men. After four years in that role the numbers started to balance out a bit more, which was encouraging.

How does the work you do help UN member states and improve the lives of people around the world?

A big part of my work on the peaceful uses of space is to promote the implementation of the 21 Long Term Sustainability Guidelines for space. By helping reduce barriers to implementation of these guidelines, we’re making space more accessible and sustainable. Satellites in space can be used for so many purposes, such as monitoring climate issues and providing connectivity and access to information for those in remote and isolated areas. Our work supporting the International Monitoring System (IMS) of the CTBTO ensures that the globe is monitored around the clock for illicit nuclear weapons tests that can have profound negative impacts on populations, environments, and global security.

What is the United States doing to promote gender equality in government and in STEAM?

The United States is working to promote gender equality in the UN and other international organizations that I work with here in Vienna, including by actively recruiting women to apply for available jobs at the CTBTO and United Nations Office for Outer Space Affairs (UNOOSA). We are also working to recruit more female candidates for positions of leadership within the political bodies of these organizations as well. The State Department has a number of gender equality initiatives, and at here post we have a women’s mentoring group.

How does your work further U.S. interests?

I support our delegations engaging in the various meetings of the CTBTO and Committee on the Peaceful Uses of Outer Space (COPUOS) where we work to promote U.S. interests and combat malign influence.