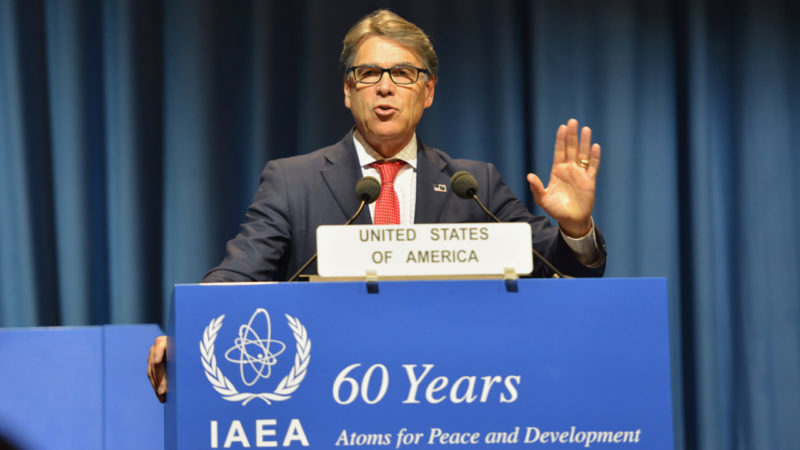 Congratulations on your election as President of this Conference.

I also want to thank Director General Amano for his outstanding service.  Since 2009, the IAEA has been the beneficiary of your steady leadership and extensive knowledge.  To begin, I would like to share a message from President Trump:

I extend my greetings to the delegates of the 61st International Atomic Energy Agency (IAEA) General Conference.

For the past six decades, the IAEA member states have made great strides in promoting the peaceful use of nuclear technology and developing nonproliferation norms.  Strong partnerships between our nations and respect for these norms continue to be vital to achieving our shared goals of harnessing nuclear energy and ensuring a more peaceful world.  The United States remains committed to working closely with the IAEA in establishing nuclear security guidelines, preventing the loss or theft of nuclear materials, and putting an end to the threat of nuclear terrorism—one of the greatest challenges to international security.

The IAEA serves a critical role in monitoring nuclear programs around the world.  The United States supports these efforts and strongly encourages the IAEA to exercise its full authorities to verify Iran’s adherence to each and every nuclear-related commitment under the Joint Comprehensive Plan of Action.  We will not accept a weakly enforced or inadequately monitored deal.  In North Korea, the regime’s actions and threats of nuclear terror should be a concern for all nations.  The United States continues to consider all options to address the North Korean threat to international peace and security, and would welcome the IAEA’s return to North Korea should that state finally choose a path of peace instead of nuclear provocation.

Together, the IAEA member states can work together to build a world safe from nuclear threats and free to pursue the peaceful use of nuclear technology.  On behalf of the American people, I wish all those gathered the best for a successful conference.

I am honored to lead the U.S. delegation to the 61st IAEA General Conference.

The IAEA was established 60 years ago to accelerate the contribution of atomic energy to peace, health, and prosperity, while supporting global efforts to stop the spread of nuclear weapons.  Six decades later, the responsibility to guard against the malicious use of atomic energy is no less urgent.

Safeguards, a fundamental element of nonproliferation, are essential to achieving the “fullest possible exchange” of nuclear technology for peaceful purposes.

One of the IAEA’s key safeguards objectives is the monitoring and verification of the Joint Comprehensive Plan of Action (JCPOA) with Iran.  Strict enforcement of this agreement is vital to its success, and the United States is committed to providing the resources necessary to support the IAEA’s mission.

I would like to thank the IAEA for dedicating a significant number of staff and resources to the JCPOA.  The experienced inspectors and analysts who are monitoring and verifying Iran’s nuclear-related activities on a daily basis are key to vigorous enforcement of this agreement.  A robust and sustained monitoring and verification effort is critical to the long-term success of the JCPOA.

While this agreement has unique features, it also relies on standard IAEA procedures.  This includes the Additional Protocol, which is in force in 130 countries, including the United States.  We fully support the IAEA’s vigorous and effective use of all its authorities to monitor and verify Iran’s nuclear commitments.

The United States is ready and able to make the necessary financial contributions to the IAEA, and we urge our partner countries to do the same.

We all must ensure that the IAEA has sufficient resources to carry out the full range of activities necessary for robust verification, including to verify that Iran strictly adheres to each and every JCPOA commitment.

Noncompliance with safeguards, including by North Korea and Syria, is a serious matter that must be addressed.  We must continue to hold Syria accountable for its past construction of a clandestine nuclear reactor, and we must reinforce the authority of the IAEA as a critical element in the international strategy to contain and walk back North Korea’s nuclear program.

Just as important as insisting on compliance with nonproliferation obligations is further strengthening implementation of the state-level concept, which makes safeguards more efficient and effective by considering a state’s nuclear and nuclear-related activities as a whole.

Effectively securing nuclear and radiological materials is also critical to maintaining support for and facilitating the use of nuclear technology for peaceful purposes.  As we are all aware, terrorism does not recognize international boundaries.  In order to combat terrorist threats effectively, we must work together to continually improve nuclear security on a global level and help ensure that all nuclear material is protected from theft or misuse.

The countries represented in this room have made significant commitments to nuclear security, but we must also turn these commitments into actions.

All of us in this room should subscribe to, and implement, the Joint Statements that were highlighted at the December 2016 IAEA International Conference on Nuclear Security.  These Joint Statements describe specific steps that committed countries will take to prevent nuclear terrorism, including countering nuclear smuggling, mitigating insider threats, and protecting nuclear material in transit.

We will also have an opportunity to gather in Vienna later this year for a conference focused on the Convention on the Physical Protection of Nuclear Materials and Nuclear Facilities.

The United States strongly supports universal adherence to the Amended Convention.  The Convention serves as the only legally binding international instrument in the area of physical protection of nuclear material, and we believe the Conference provides the ideal opportunity to discuss its implementation.  We encourage your participation in the November conference.

The United States is doing its part to reduce the worldwide threat of nuclear terrorism.  The United States provides significant technical and financial support to help the IAEA fulfill its central coordinating role in strengthening nuclear security, as well as the Agency’s vital work in international nuclear and radiological incident response capabilities.

The United States also engages directly with other countries to enhance security and eliminate excess nuclear material.  Over the last year, we worked with our partners to remove a large amount of highly enriched uranium from Kazakhstan, and convert a reactor in Ghana from the use of highly-enriched uranium to low-enriched uranium.

A third factor that is vital for the peaceful use of nuclear energy to flourish worldwide is safety.  The Convention on Nuclear Safety and the Joint Convention are key to enhancing nuclear safety worldwide.  We applaud Member States and the IAEA’s continued support for these and other important legal instruments.

The United States is a leader in promoting the peaceful use of nuclear energy across the globe.  We have made over $320 million in voluntary contributions to the Agency’s work in this area since 2010, including major contributions to the Peaceful Uses Initiative, which allows the IAEA to address real needs in countries around the world, complement international assistance priorities, and advance the goals of the NPT.

I am also pleased to announce that the United States is contributing another $3.1 million in new funding for Renovation of the IAEA’s Nuclear Applications Labs at Seibersdorf.  This will make the total of U.S. contributions for the renovation effort well over $15.6 million.

We make these commitments because we see the peaceful benefit of nuclear technologies each and every day.  Nuclear energy is an essential source of safe, clean, reliable, and affordable power.  It provides hundreds of thousands of competitive, high-paying jobs, and our nuclear industry is the worldwide leader in technology and safety.

In June, President Trump announced an initiative to revive and expand America’s nuclear energy sector, starting with a complete review of U.S. nuclear energy policy.  That review is now underway.

To further strengthen the U.S. nuclear sector, my Department is partnering with industry to invest in innovative reactor technologies that have game-changing potential.  The U.S. Government and industry are also looking forward to participating in the IAEA’s Ministerial Conference on Nuclear Power in the 21st Century.

Finally, a key element of continued public support for peaceful nuclear energy and growth for the future are predictable and reasonable legal frameworks.

A common legal framework for nuclear liability will reinforce with the public our commitment to safety and will also benefit international civil nuclear cooperation.  Accordingly, the United States continues to encourage countries to join the Convention on Supplementary Compensation for Nuclear Damage.

Over the course of this conference we will be called on to address pressing challenges, including harnessing the atom to meet the energy demands of a growing world, keeping nuclear material out of the hands of terrorists, and detecting and deterring clandestine nuclear weapons programs.

The United States remains committed to strengthening the IAEA.  We will meet the challenges that lie ahead, and I urge all Member States to recommit themselves to this same goal.