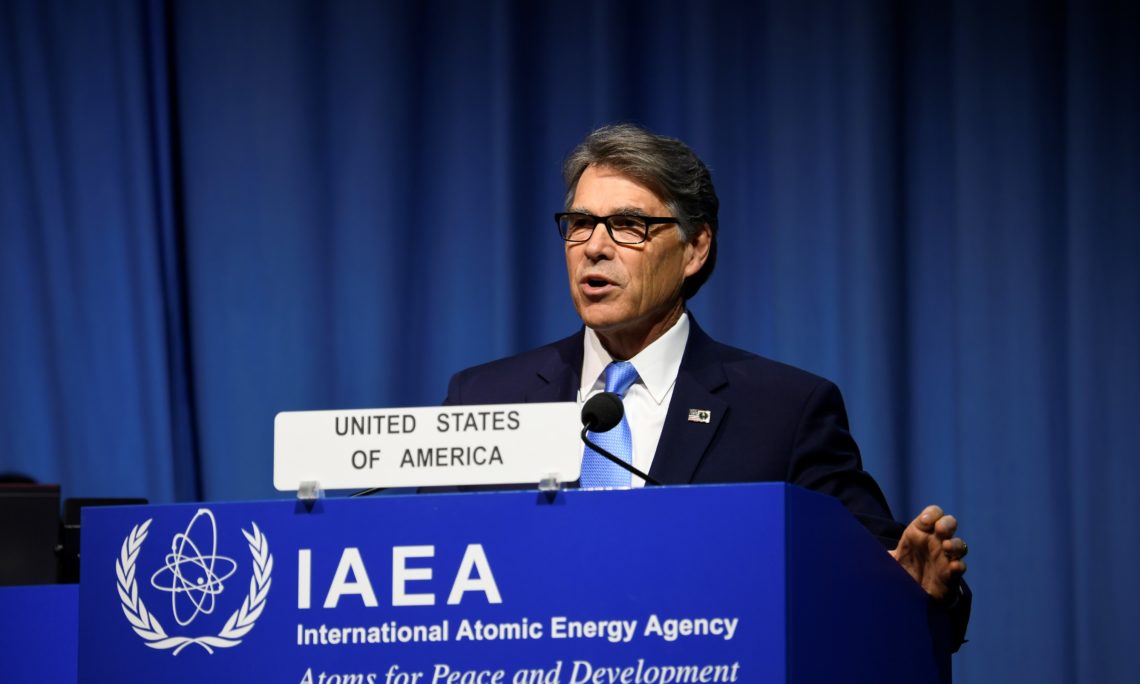 Madam Director, thank you very much.

I’d like to begin with a letter that I bring from the President of the United States.

I send my greetings to the delegates of the 62nd International Atomic Energy Agency (IAEA) General Conference.

The United States strongly supports peaceful nuclear cooperation.  This includes American investments in IAEA programs, which have positively affected the lives of people around the world through advancements in industry, medicine, agriculture, and energy production.  It also includes American development and exports of advanced nuclear reactors that maintain the highest standards of operational efficiency, supporting jobs in a critical industry in the United States.

Nuclear proliferation remains a serious threat to a peaceful world.  We will continue promoting high standards of safety, security, safeguards, and nonproliferation, including an Additional Protocol as the international standard, and call on other nations to do the same.  We must ensure Iran’s nuclear program is exclusively peaceful and that Tehran is permanently denied any pathway to nuclear weapons.  In addition, the Syrian regime must cooperate fully with the IAEA to comply with its IAEA safeguards obligations.

Finally, I am pleased that Chairman Kim has reaffirmed his commitment to complete denuclearization of the Korean Peninsula.  While this will need to be verified, I have confidence that he will honor our agreement, and, equally important, our handshake.  The United States appreciates the IAEA’s readiness to contribute to our efforts to promote peace and the security of both the Korean Peninsula and the world.

Together, we are making strides toward our shared goals.  While much work remains, the collective efforts of IAEA member states are reducing the threat of nuclear war and nuclear terrorism.  On behalf of the American people, I thank you and send my best wishes for continued success.

For me personally, it is an honor to join you for this year’s IAEA General Conference.  We miss seeing Director General Amano in person and certainly pray and wish for a speedy recovery.

In keeping with the IAEA’s motto of “Atoms for Peace and Development,” I am pleased to announce that the United States is making a $1.1 million extrabudgetary contribution to help the IAEA build a new energy center to power its Nuclear Applications Laboratories.  These labs help Member States reap the benefits of the peaceful uses of nuclear energy.

John F. Kennedy once said we hold “the power to abolish all forms of human poverty and human lives.”

These words reflect IAEA’s goal of transforming nuclear power from a tool of destruction into one of prosperity and peace.

We’ve made undeniable progress towards that goal.

Decades ago, only a few nations were developing peaceful nuclear energy.

Today, nuclear energy spans much of the globe.

Decades ago, JFK warned that as many as 20 countries could one day possess nuclear weapons.

Today, we’re not even close to seeing that many nations with such capabilities.

And the statement between President Trump and Chairman Kim provides further hope for progress.

From Security Council resolutions to Presidential leadership, it was firm resolve which brought us to this dialogue and that same resolve can bring us final, verified denuclearization.

But despite our progress, challenges remain.

As the President said, Syria must cooperate with the IAEA on nuclear activities.

And for Iran, the JCPOA was a flawed deal which failed to address continued misconduct.

Here in Vienna, an Iranian diplomat was arrested in July for supplying explosives to terrorists seeking to bomb a political rally in France…and in the U.S., our Justice Department arrested two individuals last month for spying on Iran’s behalf.

So we are re-imposing key sanctions and seek only a deal that fully addresses Iran’s nuclear program, its proliferating activity, and its destabilizing activities.

Ensured by robust monitoring and verification, the IAEA must insist upon Iran’s cooperation.

And we must deny nuclear weapons to non-state actors as well, including terrorists.

We must protect nuclear and radioactive material from theft or misuse.

And yes, we must expand the peaceful use of nuclear power.

That includes nuclear medicine.  And so, the U.S. is committed to producing Moly-99, a medical isotope which detects and diagnoses cancer and other diseases without using highly enriched uranium, thus avoiding proliferation.

And that includes nuclear energy, that produces nearly one-third of the world’s clean electricity onsite 24/7.

Now imagine providing this power to the 1.3 billion people without electricity in our world.

And imagine something else as well.

Imagine one day fulfilling the words of the Biblical prophet, Isaiah famously inscribed on a wall across from the United Nations:

“They shall beat their swords into plowshares, their spears into pruning hooks. Nation shall not lift up sword against nation, neither shall they learn war anymore.”

The journey is not easy.

It means standing up to aggression, sitting down to discuss, being resolute and strong, and being open to dialogue.

But there is no journey which matters more.

And let us embark upon it today.