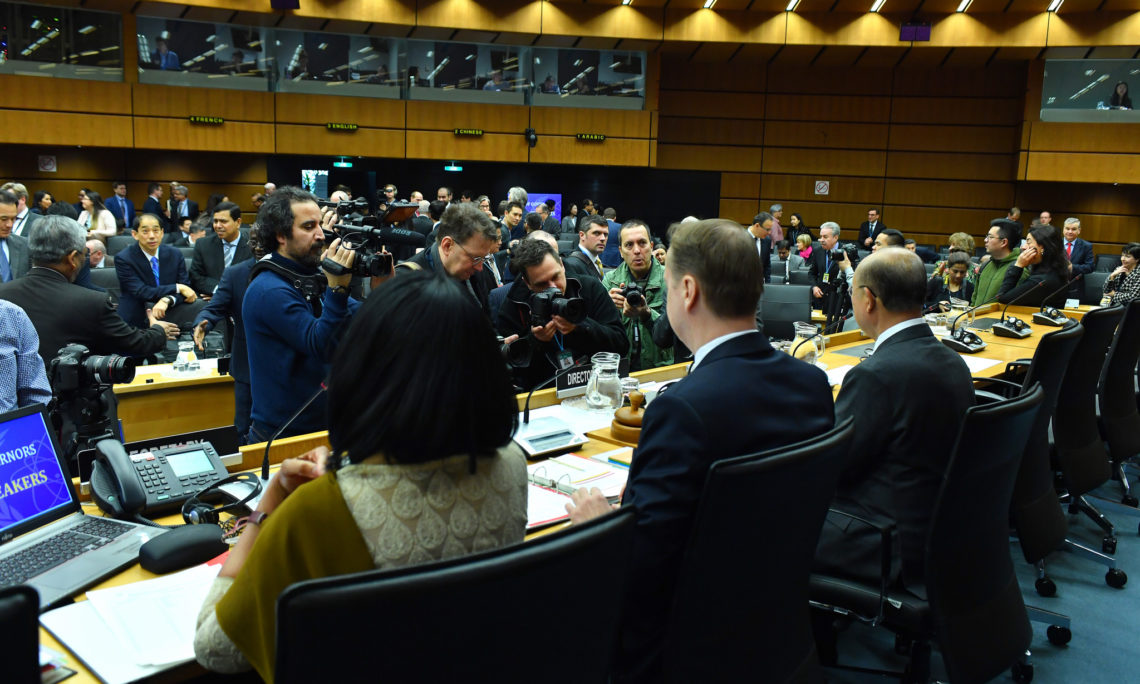 The United States welcomes the Director General’s February 22 report on verification and monitoring in Iran, and we once again extend our appreciation to the Director General, the Deputy Director General for Safeguards, and their staff, for their excellent work and continued professionalism in carrying out their responsibilities in Iran. It is critical that the IAEA continues to monitor and verify Iran’s safeguards agreements as well as Iran’s implementation of all its nuclear-related commitments under the Joint Comprehensive Plan of Action.

The United States has made clear our concerns with the JCPOA, and that we look forward to addressing the deal’s deficiencies. We have also made clear that we continue to uphold our commitments under the deal, and that we expect Iran to strictly implement its own commitment.

Iran must fully adhere to all of its JCPOA commitments in order to build confidence that its nuclear program is and remains exclusively peaceful. Nothing short of full implementation will allow the IAEA to assure the international community that Iran is upholding its commitments. IAEA verification and monitoring of all of Iran’s nuclear commitments remains essential. No nuclear-related commitments under the deal are exempt from IAEA verification. Should any new question or concern arise regarding Iran’s nuclear activities, including any potential weaponization-related issue, the IAEA maintains its full safeguards authorities to investigate them, in addition to the expanded authorities provided under the JCPOA.

In addition, we welcome the IAEA’s request for further clarifications under the Additional Protocol regarding Iran’s plans relevant to the development of the nuclear fuel cycle, including research and development activities for naval nuclear propulsion. Iran must fully cooperate with all IAEA requests for information and access regarding such plans, and all nuclear-related activities must be fully consistent with Iran’s safeguards obligations and JCPOA commitments.

The IAEA will need to continue robustly exercising its authorities to verify Iran’s declarations and monitor the JCPOA. Any new and credible concerns of undeclared nuclear material or activities inconsistent with the JCPOA can and must be pursued by the IAEA, and we have full confidence that the Agency and its highly skilled and professional inspectors would do so appropriately. As the Director General has made clear, the Agency has the authority to request access to any relevant location in Iran – without distinction between military and civilian – if it has credible reason to verify the absence of undeclared nuclear activities or activities inconsistent with the JCPOA.

The issues discussed in the Director General’s report underscore the importance of robust and sustained efforts by the IAEA to fulfill its monitoring role on the ground in Iran, and the requirement for the necessary resources to carry out these important tasks. The United States welcomes the numerous pledges of financial support for the IAEA’s efforts with respect to JCPOA monitoring, as well as the integration of appropriate verification costs into the regular budget. We were pleased to announce last November a pledge of one million dollars for JCPOA monitoring and verification efforts in Iran, and look forward to continued, strong support from other member states in this regard.

With these comments, the United States takes note of the Director General’s report contained in document GOV/2018/7, and requests that the report be made public.