Home Home | News & Events | U.S. Statement to the IAEA Board of Governors on North Korea 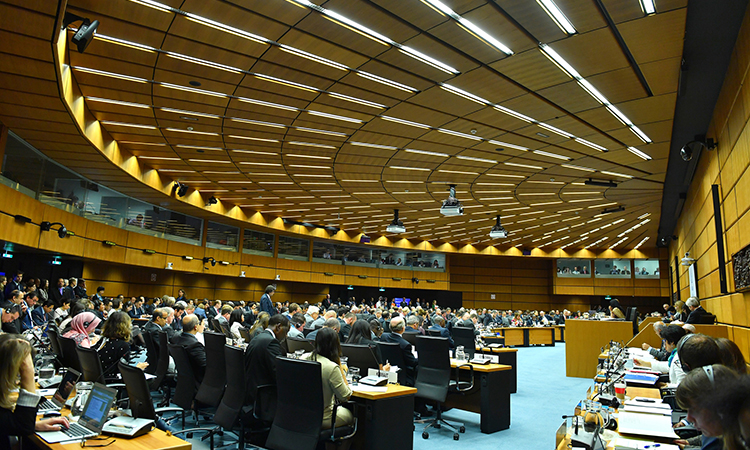 The United States condemns in the strongest possible terms the DPRK’s unlawful nuclear and ballistic missile activities including its sixth nuclear test on September 3, 2017 which it claimed was of a “H bomb for an ICBM.”  North Korea’s latest nuclear test follows the dangerous and reckless August 28 ballistic missile launch over Japan, and two ICBM launches in July.  With its latest nuclear test, the DPRK declared it had attained “the final goal of completing the state nuclear force” drawing closer to its stated objective to be able to attack United States cities with nuclear weapons, as well as cities of other member states.  The DPRK’s provocative and escalatory actions are a clear and unacceptable threat to international peace and security and directly challenge all of us in this Board room.

We must make it clear to the DPRK that it will not achieve the security or the prosperity that it seeks, until it complies with its international obligations and fulfills its commitments to abandon its UN-proscribed nuclear and ballistic missile programs.  The DPRK’s flagrant violations of international law and its disregard for international norms will not lead to acceptance of a nuclear armed state.  Quite the contrary, as demonstrated by the unanimous adoption of UNSCR 2371 and UNSCR 2375 on September 11, 2017, the United States together with the international community stands resolute in our opposition to North Korea’s possession and pursuit of nuclear weapons and their means of delivery.  The international community has spoken.  Through decisive economic and diplomatic pressure—through our concrete actions—we must ensure North Korea hears the unified message of the international community loud and clear, every day, in every available channel.   In every outlet the DPRK uses to attempt to legitimize its unlawful pursuit, including international organizations and bilateral diplomatic relations, our grave concerns need to be echoed and translated into action.

All of us in this Board room must work together to exhaust our efforts to pressure the North Korean regime to change course, uphold its international obligations and commitments, and abandon its unlawful programs.  Full implementation of the UN Security Council Resolutions is critical, but the United States views these measures as the floor, not the ceiling of international efforts to apply maximum pressure on the DPRK.

U.S. policy towards North Korea is clear.  The United States does not seek regime change, the collapse of the regime, an accelerated reunification of the Korean peninsula, or an excuse to garrison troops north of the Armistice Agreement’s Military Demarcation Line.  We do not seek to be a threat to the Kim Jong Un regime.  But let me be clear, the United States has the unquestionable ability and unbending will to defend itself and its allies.  The United States remains ready and willing to engage the North in serious talks, but North Korea has demonstrated that it is not interested.  The international community must speak with a unified voice against destabilizing actions, not create counterproductive equivalences—false equivalences—that cannot serve as the basis for future discussions.

As we look ahead to next week’s General Conference, the DPRK’s unlawful production of fissile material, together with each and every nuclear and ballistic missile test, warrants a firm and unequivocal response from this Board and all member states.  The United States welcomes the Director General’s 2017 report on the Application of Safeguards in the DPRK.  We remain firmly committed to the IAEA’s essential role in the complete, verifiable, and irreversible denuclearization of North Korea.  We greatly appreciate the Secretariat’s efforts to maintain the Agency’s readiness to resume monitoring and verification in the DPRK, welcome the Director General’s announcement that these efforts are to be further enhanced, and commend the Board’s sustained attention to the DPRK’s nuclear file.

In conclusion, the world faces no greater security challenge today than that posed by North Korea.  The complete, verifiable and irreversible denuclearization of the Korean peninsula is our overriding priority, and we must apply maximum diplomatic and economic pressure on the Kim Jong Un regime to cease its provocative actions, and abide by its international obligations and commitments.