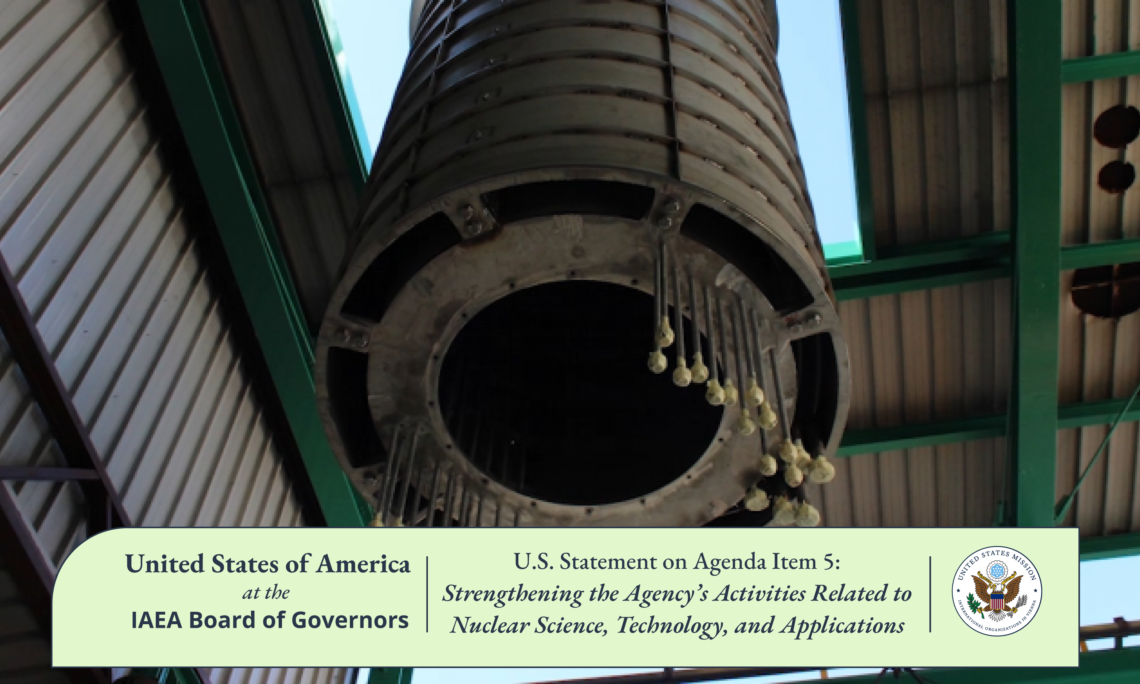 The United States thanks the Secretariat for this year’s report on recent developments in the application of nuclear energy, science, and technology to address urgent challenges in the fields of human and animal health, energy and economic development, sustainable agriculture, and the environment.

The United States seeks to promote the fullest possible exchange of nuclear technology for peaceful purposes, emphasizing the value of promoting high standards of nuclear safety, security, and safeguards, together with rigorous and effective nonproliferation measures, consistent with our obligations under the Treaty on the Non-Proliferation of Nuclear Weapons. We demonstrate our commitment to the NPT by supporting the IAEA’s work in these areas, including with significant contributions of voluntary funding. Since 2010, we have provided the IAEA with voluntary contributions totaling more than $450 million to promote peaceful nuclear activities, including more than $118 million toward the IAEA’s Peaceful Uses Initiative, which celebrated its 10th anniversary in 2020. We urge others to contribute through the PUI and other voluntary funding mechanisms in support of critical IAEA work in advancing the peaceful uses of nuclear energy, science, and technology.

Noting the emphasis in this report on nuclear energy, we underscore that nuclear power plays an important role in helping countries achieve their national energy needs and in mitigating climate change. The United States has the largest nuclear power program in the world with new construction underway and extensive experience in exporting nuclear reactors, which meet the highest standards for safety, security and nonproliferation. In addition, the U.S. government continues to support the development, production and operation of small modular reactors (SMRs). We believe SMRs will be transformative due to their modular design and scalability, their ability to integrate with renewable energy sources, and their broad range of applications beyond electricity generation, including desalination.

The United States supports those countries seeking to develop nuclear energy as a part of their energy mix, and we are, therefore, a strong supporter of the IAEA’s programs of support for nuclear infrastructure development and have provided significant funds to these efforts under the PUI. We underscore the value of the Agency’s nuclear power infrastructure and capacity-building services to Member States, including especially the IAEA Peer Review Missions, and emphasize U.S. support for the Agency’s continued application of the “Milestones Approach” in its work with countries interested in nuclear power. The United States also applauds the Agency’s work in supporting existing operational reactors in the areas of operating performance, management systems, plant lifetime management, human resources development, and the safe and secure management of nuclear and radioactive materials. We appreciate the Secretariat’s decision to hold the next International Ministerial Conference on Nuclear Power in the 21st Century in the United States.

We take note of the information in this report on the Agency’s work in response to the ongoing global pandemic, and we commend the IAEA for its work in using nuclear-derived technology to support Member States in their fight against COVID-19. We welcome further efforts by the Agency to ensure that nuclear and nuclear-derived technologies are accepted by and made available to Member States for application in fields ranging from human health to food and agriculture. In this regard, we note the critical role of the nuclear applications laboratories at Seibersdorf in developing, testing, and scaling technology to meet the needs of IAEA Member States. We were pleased to make an extrabudgetary contribution to the final phase of the project to upgrade these laboratories, which will increase the IAEA’s capacity to respond to Member State needs in many of the areas addressed in the Nuclear Technology Review.

The report extensively details an impressively long list of applications of nuclear and nuclear-derived technology. We note in particular the important role of collaboration both internally and with other international partners, for example, the work of the Program of Action on Cancer Therapy, the IAEA Environmental Laboratories in Monaco, and the IAEA/UN Food and Agriculture Organization Joint Division.

Our strong commitment to the IAEA’s programs that assist Member States in the application of the peaceful uses of nuclear technology to meet their national development priorities – from energy to food and health – is grounded in the positive impact these programs have on Member States. For this reason, we underscore the importance of the application of outcome-based, qualitative performance indicators, which demonstrate the efficacy of IAEA programs in these areas by documenting tangible results and sustained progress. We stand ready to assist the Secretariat in this regard.

With these comments, the United States takes note of document GOV/2021/2 and requests that it be transmitted to the General Conference.