IAEA BoG – U.S. on Any Other Business
By U.S. Mission UNVIE
6 MINUTE READ 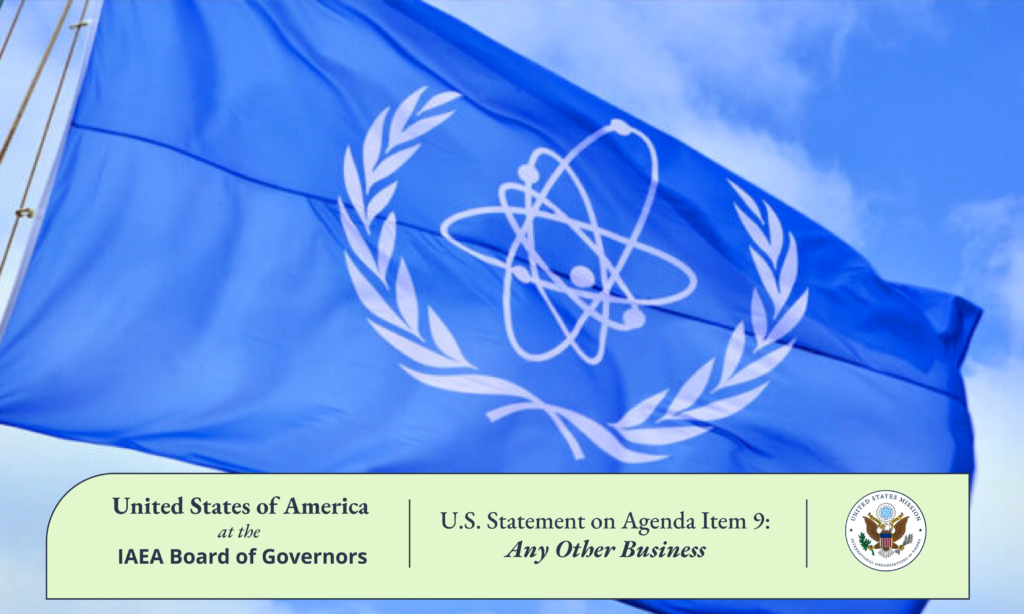 IAEA Board of Governors Meeting, Agenda Item 9: Any Other Business Consolidated Statement

Thank you and good morning, Madam Chair, to you and our distinguished colleagues.

As we continue to look forward to the Non-Proliferation Treaty (NPT) Review Conference (RevCon), which we hope will be held in August, the United States stands ready to work closely with RevCon President-designate Ambassador Gustavo Zlauvinen of Argentina and all NPT Parties toward a positive outcome. The Treaty’s 50th anniversary last year reminded us of what has been accomplished, the hard work that remains, and the key role that the IAEA continues to play in helping to realize the goals of the NPT.

The nonproliferation assurances provided by the NPT and IAEA safeguards instill confidence that helps “facilitate the fullest possible exchange” of nuclear technology for peaceful purposes, and “accelerate and enlarge the contribution of atomic energy to peace, health, and prosperity throughout the world.” To strengthen this virtuous cycle linking nonproliferation and development, we continue to encourage states to adopt high safeguards standards, which include adopting the Additional Protocol, and we work to identify ways to expand access to the benefits of nuclear energy and other applications and seek to ensure that these benefits accrue to those that need them the most.

The United States regrets that the issue of so-called “Israeli nuclear capabilities” has once again been raised in the Board, as Israel has not violated any agreements with the IAEA and is a significant contributor to the Agency’s work. Divisive statements aimed at criticizing a state in good standing will not advance our shared goal of a Middle East free of all weapons of mass destruction and delivery systems. Such statements seem increasingly out of touch with the regional political and security realities and only serve to perpetuate the lack of trust among regional states. We urge the regional states concerned to refrain from politically motivated statements and to engage their neighbors directly in an inclusive, cooperative manner about their regional security concerns.

The United States firmly supports the long-term goal of a Middle East free of weapons of mass destruction and delivery systems, alongside a comprehensive and durable regional peace. We are committed to working cooperatively with the regional states to advance this goal in an inclusive, consensus-based manner that takes into account the legitimate regional security concerns of all regional states.

The United States wishes to congratulate Dr. Buglova on assuming her role as Director of the Division of Nuclear Security. We appreciate our long history of collaborating with the Division to advance the Agency’s efforts in the field of nuclear security and to improve the global nuclear security regime. This important work has proceeded well despite the impact of the pandemic. We thank the Division for its resilience and look forward to continuing this close cooperation.

We also look forward to working with our fellow Member States to negotiate a strong Nuclear Security Plan for 2022-2025, which will lay the foundation for continued success going forward. As a start, the Plan should build upon the Division’s key efforts in recent years and reflect the priorities highlighted in our resolutions and Declarations, including the Ministerial Declaration from the 2020 International Conference on Nuclear Security. The Plan should also reflect Director General Grossi’s vision for the Agency to be a true focal point for nuclear security. We also look forward to receiving more updates from the IAEA and to more sustained engagement with Member States on plans to establish and operate a nuclear security demonstration and training center at Seibersdorf.

The United States welcomes the opportunity to host IAEA Member States and others at the International Ministerial Conference on Nuclear Power in the 21st Century in Washington, D.C. This event comes at a defining moment when IAEA Member States are working together to unlock the full power and potential of safe, secure, reliable, and clean nuclear power around the globe. The United States continues to make steady progress with preparations for the event and is committed to hosting a highly successful Ministerial Conference.

The United States welcomes the Director General’s announcement in his introductory statement that he continues to support making the Office of Internal Oversight Services’ internal audit reports publicly available and that he has identified an appropriate procedure for doing so, starting this year. The United States appreciates this important demonstration of the Agency’s commitment to sound financial and administrative management and is pleased that the IAEA’s practice in this area will now align with those of numerous other international organizations.

The United States welcomes the action by Sudan to modify the Small Quantities Protocol (SQP) to its Comprehensive Safeguards Agreement. We also urge states that have not yet done so to modify or rescind any outdated SQPs.

The United States also appreciates the exceptional service of Deputy Director General Juan Carlos Lentijo. Under his leadership, the Department of Nuclear Safety and Security has successfully increased international awareness of the Agency’s nuclear safety standards and security guidelines. The entire team at the U.S. Mission wishes to DDG Lentijo for success in all of his future endeavors.

And finally, while we have the floor, we thank you, Ambassador Hulan and your team for all your hard work chairing the Board meeting.