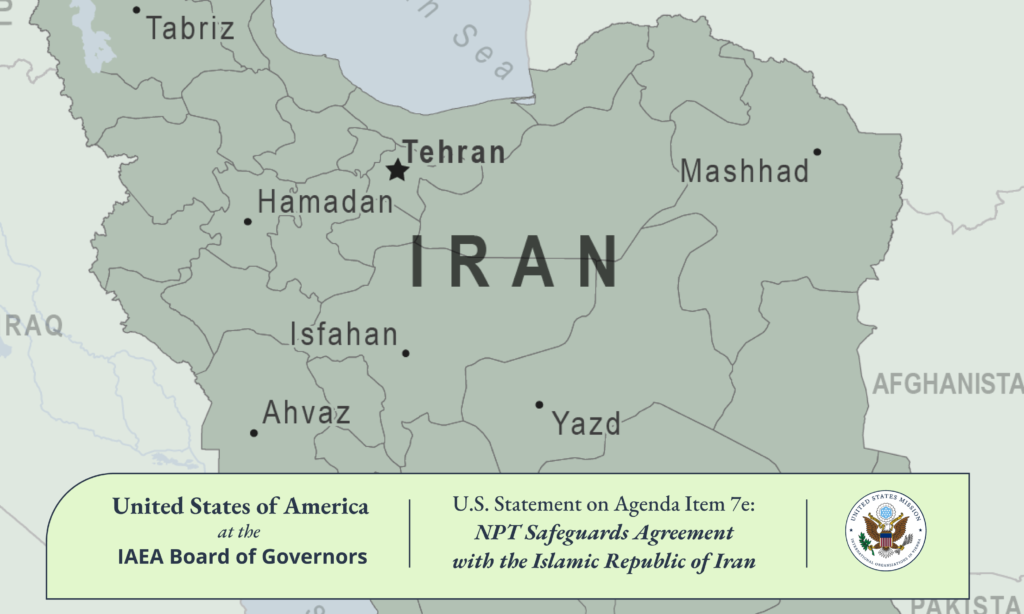 We thank the Director General, the Deputy Director General for Safeguards, and their team for their continued dedication in carrying out their critical safeguards responsibilities in Iran, and we appreciate the Director General’s latest report on this important topic. The Secretariat’s professional and impartial reporting is critical to the Board’s ability to remain apprised of and accurately assess the status of Iran’s implementation of its safeguards obligations and the Agency’s concerns about whether Iran is fully meeting them.

It is the strong hope of the United States that at long last international concerns about Iran’s nuclear program can be resolved. To achieve that outcome, the IAEA must be in position to provide assurance that Iran is meeting its safeguards obligations and that there are no outstanding indications of nuclear material in Iran that is not under IAEA verification. The Director General’s latest report indicates that not only is that not the case, but that outstanding questions are mounting. The United States shares with others deepening concern over the developments reported by the Director General. Compliance with safeguards obligations is not optional and is separate from Iran’s implementation of its JCPOA commitments.

In particular, the IAEA’s detection of chemically-processed uranium particles at two undeclared locations where Iran denied required IAEA access for seven months last year is deeply troubling. That Iran has yet to provide required clarifications regarding these locations or another, extensively sanitized location where the IAEA believes Iran may have worked with uranium metal in the 2002-2003 timeframe is also cause for deepening concern. These updates come against the backdrop of the IAEA’s detection, over two years ago, of nuclear material particles at a fourth undeclared location in Iran. The Director General reports that despite 18 months of engagement, Iran’s explanations for the presence of these particles remain unsatisfactory because they are not technically credible.

In all four cases, the IAEA is seeking to establish confidence that there is no undeclared nuclear material in Iran today and that Iran’s current declarations of nuclear material are complete. To provide the international community with the confidence Iran says the world should have in the peaceful nature of its nuclear program, Iran must cooperate fully with the IAEA without further delay to resolve these issues.

In the context of these disturbing safeguard developments, Iran recently notified the IAEA that, as of February 23, it would stop implementation of a number of important verification and monitoring measures, including both JCPOA-specific measures and the provisions of Iran’s Additional Protocol. The Additional Protocol provides the IAEA critical information and access necessary for assuring the international community of the absence of undeclared nuclear material and activities in Iran. How does ending such monitoring serve Iran’s goal of re-establishing confidence in its nuclear programs and intentions? In short, these steps are counterproductive, and Iran should reverse them.

We commend the professionalism that the Director General and his team have shown in their efforts to engage Iran on these important verification issues, including their recent trip to Tehran. We note the announcement that Iran will continue to implement its comprehensive safeguards agreement with the IAEA fully and without limitation, and that the IAEA and Iran have reached a temporary technical understanding regarding certain monitoring and verification measures.

We also note the DG’s message yesterday and this morning that he has sent another letter offering focused and systematic engagement with Iran on these issues with the objective of resolving them cooperatively, and we strongly hope that Iran will take up this offer. We fully support the Director General’s efforts to this end, while reiterating the need for Iran to fully meet its verification commitments and obligations.

Director General Grossi is giving Iran every chance to fully cooperate with the Agency to resolve these questions. It is the responsibility of this Board of Governors to support the Secretariat in carrying out its essential monitoring and verification activities. It is also our responsibility as Board members to protect the integrity of the international nuclear safeguards regime more broadly, as these issues affect the regime globally.

This Board spoke clearly in its June 2020 resolution: Iran must cooperate fully with the Agency and satisfy its requests without further delay. The Board should once again speak clearly and with one voice in strong support of the Secretariat’s ongoing efforts toward addressing these serious concerns.

Iran has now been given another opportunity by the Director General to offer up the necessary cooperation before this Board next meets. We will be watching closely for a constructive Iranian response that enables the substantive progress. The United States, like all Board members, will calibrate our views on the Board’s next steps according to whether Iran seizes the opportunity now before it to finally and credibly address the IAEA’s concerns.

Robust verification is the core of the global nonproliferation regime and the bedrock on which durable nuclear nonproliferation agreements and arrangements are built. President Biden has made clear: we remain ready to reengage in meaningful diplomacy to achieve a mutual return to compliance with the JCPOA. And while these safeguards issues are a separate topic, resolving them will also be essential for establishing confidence in Iran’s nuclear-related assurances. Therefore, the Board must remain seized of these matters until they are resolved.

I conclude by taking note of the Director General’s report contained in GOV/2021/15, and request that the report be made public, in keeping with past precedent.