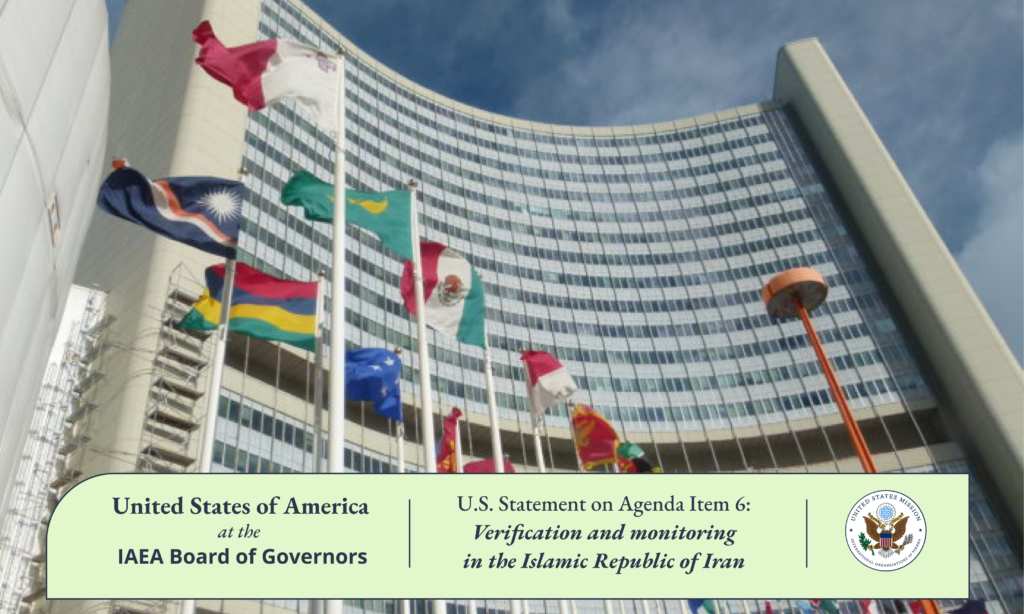 IAEA Board of Governors Meeting, Agenda Item 6: Verification and Monitoring in Iran

As President Biden has made clear, the United States, in close coordination with our allies and partners, is ready to reengage in meaningful diplomacy to achieve a mutual return to compliance with the JCPOA, a key achievement of multilateral diplomacy, and a vital instrument in addressing the international community’s longstanding concerns with Iran’s nuclear program. We hope that Iran will agree to begin necessary discussions on a diplomatic way forward without delay.

We have much hard work ahead of us. To accomplish it, confidence must be rebuilt – in Washington, in Tehran, and elsewhere. In this context, Iran’s steps toward reducing cooperation with the IAEA, including under its Additional Protocol, are troublesome and counterproductive. We commend Director General Grossi and his team for their tireless efforts to engage Tehran in maintaining necessary cooperation, most recently in his trip to Tehran just over a week ago and note the announcement of a temporary technical arrangement regarding certain verification and monitoring measures. Iran’s steps to limit the IAEA’s verification and monitoring activities at this time of renewed diplomatic opportunity will only make it harder to re-establish a pragmatic diplomacy.

IAEA verification is the cornerstone of the nuclear nonproliferation regime and the foundation on which the JCPOA is built. Iran should not undermine that foundation at the very time we all seek a return to the deal – especially considering that the IAEA continues to investigate a number of serious, outstanding safeguards concerns regarding possible undeclared nuclear material in Iran. As we stated under the earlier verification agenda item, Iran must cooperate fully with the IAEA to resolve these critical safeguards matters without further delay and comply with all of its safeguards obligations. The United States will not treat reliable verification in Iran as a bargaining chip. Rather, such continued verification is an enabler for the outcome so many of us now seek with Iran.

As the Director General’s latest report – and the numerous interim reports since we last met – make clear, Iran continues to take a series of escalatory steps that exceed JCPOA limits. In particular, the production of both uranium metal and 20 percent enriched uranium raise significant proliferation concerns. We urge Iran to refrain from any further steps beyond JCPOA limits and to return to all of its JCPOA commitments. As we have made clear, we are prepared to do the same.

We have long highlighted the importance of ensuring adequate resources in support of the IAEA’s essential verification and monitoring role in Iran. We welcome the contributions of financial support for these efforts over the past 10 years. I am therefore pleased to announce another U.S. contribution of 600,000 euros to these important efforts, in order to ensure requisite funding into 2022. Our financial support for the IAEA’s efforts reflects the importance we ascribe, now and into the future, to the continued ability of the IAEA to carry out its essential verification work in Iran.